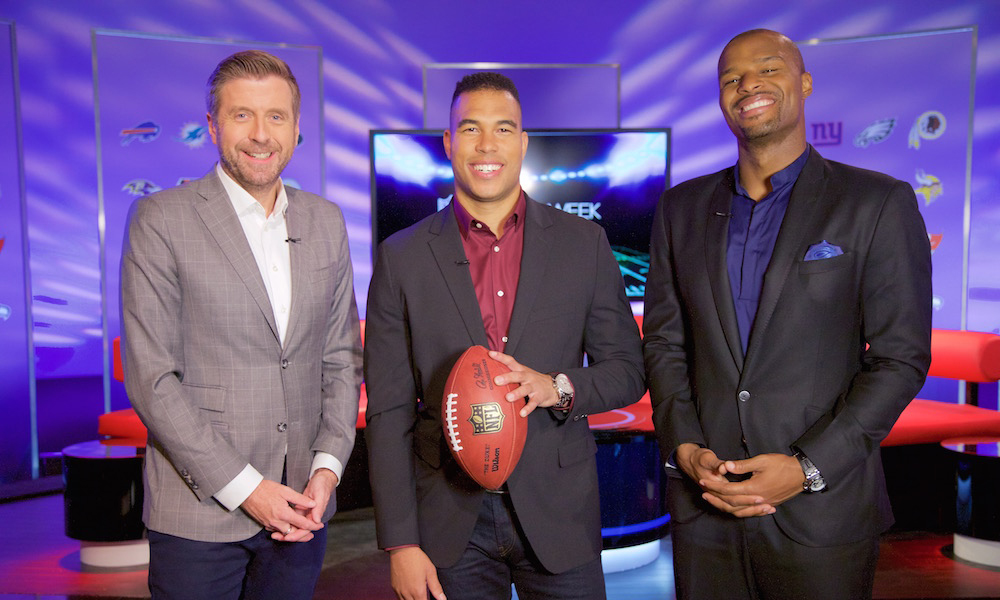 You can compare him to Dwayne “The Rock” Johnson’s character Spencer Strasmore in the HBO series “Ballers,” or you could compare him to his former teammate Michael Strahan, who’s clearing the way for athletes to take over the media landscape.

But, former NFL defensive back Jason Bell, a jack of all trades, is a rising star in his own right, and he’s quickly turning into a major name to watch out for as he evolves in numerous fields across the football world (literally).

The UCLA alum’s NFL career started after the 2001 NFL Draft, when he went undrafted and signed with the Dallas Cowboys, impressing the franchise with his work on special teams.

The trials and tribulations of an undrafted player, as told by @JasonBell33 pic.twitter.com/6MnknfhZ1B

A year later, he was claimed off waivers by the Texans around the start of their first season in the league, staying with the team as a special teams star until signing with the Giants in March of 2006.

However, injuries derailed his career, as he played four games with a fractured forearm, aggravated a back injury during the following offseason, and landed on the injured reserve in the summer of 2007. After having back surgery, his NFL career ended in 2008.

“I’m definitely happy where I am, but I do miss it,” Bell said. “But, I miss the things that most people probably wouldn’t be aware of. It’s really just the camaraderie, the locker room, those kind of things.”

Like current players will start to experience after hanging up their cleats, whether it’s former Colts quarterback Andrew Luck or former Patriots tight end Rob Gronkowski, there’s a larger void created than some may initially think when they retire.

“When you do leave the game, you kind of leave with the friends you retire with,” Bell said. “Your other friends that are playing, you don’t talk to them. They’re still going to work everyday, so that part is hard. You miss that whole unity, team thing you’ve had your whole life and all of a sudden, you’re just by yourself pretty much. That’s hard to deal with. You miss that, I still miss that to this day. I get that in other aspects of my life that I’m involved with football and sports, but nothing truly compares to that.” 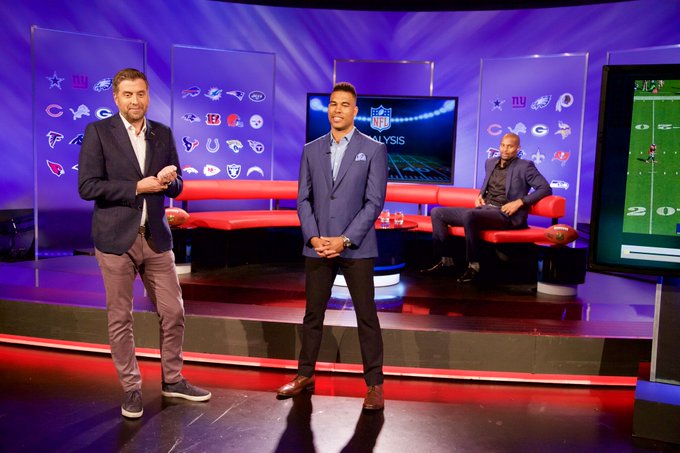 Bell took a unique path after his retirement, heading down a route that “Ballers” fans will be able to picture: private wealth management.

“When I was around, I didn’t see anybody or know anybody who was a former athlete, especially a minority former athlete, in finance,” Bell said. So, it was totally new to me. I thought I was trailblazing.”

Bell mentioned how his own experiences in NFL locker rooms inspired his decision to pursue the field, providing supply for an evident demand for financial advice.

“I was like, ‘Hmm, there’s something there, there’s something missing,'” Bell said. “The light bulb went off, and I said, I’m going to help athletes, entertainers, just young people in general that are trying to do the right things financially by understanding and being able to give advice. That was kind of the genesis of it, out of need and necessity.”

Bell wasn’t done there, though. He continued to add to his resume, heading across the pond to join the BBC’s NFL coverage, alongside former Giants teammate Osi Umenyiora.

Who else is excited to have @JasonBell33 back on our 📺 screens tonight?!

“I think finance actually really helped me on the media side,” Bell said. “I know it’s kind of crazy to say that. When you’re sitting in front of somebody trying to talk about a concept, trying to understand them and their situation, you have to be A) a good listener and B) able to deliver a message.”

Just like he did on the field in his NFL career when he transitioned his skill set between defense and special teams, Bell used his expertise to enhance the viewer experience in his sports media work.

“I knew how to pattern and deliver a message because of the financial side and history of what I’ve been doing, so I look at the audience like that,” Bell said. “I try to take this really crazy concept of football and break it down and deliver it piece-by-piece where people can digest it.”

As he continues to grow in his new profession, Bell credits Umenyiora and another former teammate, Michael Strahan, for helping him improve as a broadcaster.

It was hot in the studio today so my guy @OsiUmenyiora helped me out. #Realfriends #NFL #nfluk #thenflshow #bbc pic.twitter.com/iXBmbbowGY

“When I got on television and started doing the media side of it, luckily I had my former teammate Osi, who is just phenomenally gifted at this,” Bell said. “He and Michael Strahan are just so natural. I had two people who I could sincerely learn from.”

Much like football or any financial career, the new experience doesn’t come without its challenges.

“With [the media], it seems to me, when people tell me, ‘Wow, that’s good’ or ‘Yes, you and Osi have some talent,’ it’s so shocking,” Bell said. “Because for me, it’s just like, grind, grind, grind. I don’t really know at times when it’s good.”

This epic podcast with @OsiUmenyiora and the @NFL legend and hall of famer @michaelstrahan is coming soon. None stop laughing and stories for days. #thejason&osipodcast. pic.twitter.com/tzShuz45Z2

Another challenge? Bell’s getting his start in media in a place where the NFL isn’t the country’s top sport.

“You have to be really focused and understand that you have to pave the way for the game,” Bell said. “You’ve got to fight for your spot at the table. Nothing’s given to us, and I think we like that. I think that’s the reason Osi and I have kind of grasped this challenge because it’s a fight.”

While the NFL looks to increase its footprint in the UK, Mexico and Canada, Bell said the baseline is already there in the place he now calls home.

“The UK is a sporty nation,” Bell said. “They understand sports, sports are in their culture the same way it is in America. So, talking sports is a universal language here, so you have that ability. When you’re talking about sports and different concepts and how athletes are and how coaches are and you react to different situations, they get all that.” 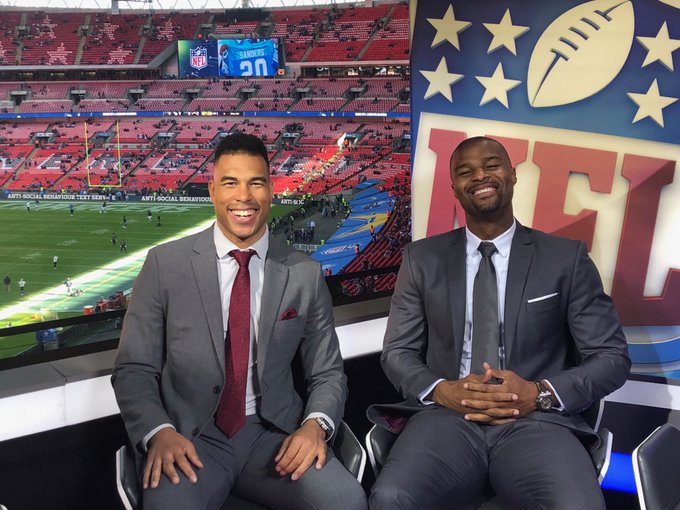 With the baseline already there, Bell’s continuing to inform those in the UK about all he can when it comes to football, starting with his work on television and continuing with the NFL Academy.

The program, introduced in London in May 2019 and starting in September, is “creating the future British stars of the NFL,” giving student-athletes the chance to continue their education while they train on the field and learn life lessons for when they’re off of it.

I’m extremely excited to be apart of this. #NFLAcademy https://t.co/31BTQiEzxK

“They’re starting [the NFL Academy], and these kids can’t wait to sign up and play,” Bell said. “It’s amazing. Now, especially with video games, the same things happen with the premiership as far as in the States because all these kids are playing with these guys on video games, so they know all the stars. Juju Smith-Schuster came out here, Odell Beckham Jr. came out here, these kids went crazy. They completely lost their minds.”

According to Bell, that fandom across the region isn’t going anywhere anytime soon.

“When you go to the games here and you see every game sold out, you see every jersey represented, you don’t see that in the States,” Bell said. “You’ll see teams come out here that won’t sell out their stadium at home. It’s sold out here. The appetite is real.” 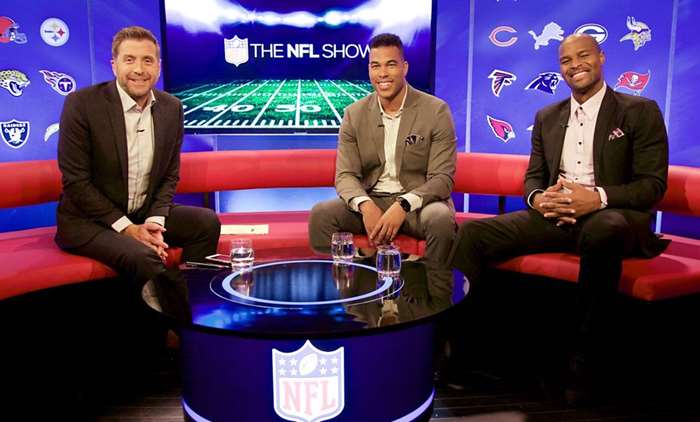 Bell has always been open to pursuing new challenges, whether it’s an NFL career, financial advising, or growing the game of football in a new part of the world. The 41-year-old’s ready to keep pushing forward with his wealth of opportunities, and had a very specific goal in mind when it comes to leaving his mark on the game of football.

“I think I’ve always been open to change,” Bell said. “I live in London now, I lived in New York, I’m from Los Angeles, I’ve lived in Texas. I just go with the flow. But, now that I’m here, I feel like this is home for a while and I’m tied into building this thing and growing this game in the UK.”

“I want my signature all over this when it’s done.”

25 thoughts on “‘Pave the way for the game’: Jason Bell making moves in media, finance after NFL career” Leave a comment ›

The Swing of Things ‘Pave the way for the game’: Jason Bell making moves in media, finance after NFL career
Loading Comments...
%d bloggers like this: