The NFL season is so close we can taste it, and there’s a ton on the plate for football fans to dive into when the schedule opens up in September.

There are so many questions that need answers, with a ton of interesting matchups to help settle things once and for all. Can Tom Brady and the Patriots repeat as Super Bowl champions without Rob Gronkowski in the fray? Will Patrick Mahomes and the Chiefs keep up the momentum from last year and head to Miami in February? What sleeper team will pop out of the shadows in 2019?

Looking at the schedule for this year, there are all sorts of great games to look forward to, with numerous combinations of games featuring the Patriots, Chiefs, Rams, Saints and more that will surely keep any fan on the edge of their seat. But, which ones are really the best of the best? That’s what this Pick-Six is for.

To help you plan your social commitments for the next six months, here are the six best games on the 2019 NFL season’s schedule, with a few extras to help you get excited for the year to come.

Honorable mentions: Chiefs vs. Chargers in Week 11 in Mexico, Cowboys vs. Saints in Week 4, Packers vs. Chiefs in Week 8

The honorable mentions are back, and we’ll move quickly through them to get to the nitty-gritty, given how many games fell into this category.

The Week 11 tilt between the Chiefs and Chargers will surely be one to watch, given how dominant both teams were in their respective 2018 schedules and the fact that all eyes will be on the squads as they head south of the border. Both teams bring back most of their lineups from last year, making this a must-watch AFC West matchup in the second half of the season.

The Cowboys have turned into a hit-or-miss team over the last few years, with Jason Garrett, Dak Prescott, Ezekiel Elliott and company struggling to figure out what’s working down in Dallas. If there’s ever a season to break out in the NFC East, however, 2019 is that year. This Week 4 test against the Saints will provide a chance for the Cowboys to prove themselves against a talented opponent, and potentially jump the line early in their divisional race.

Last, but not least, the Packers will take on the Chiefs in Week 8, in what could be a real shootout offensively between two of the league’s best quarterbacks. There are a lot of similarities between Aaron Rodgers and Patrick Mahomes, and football fans will find out if Rodgers still has what it takes when these two MVPs (former and current) square off.

Alright, fine. I’ll hop onto the Browns hype train for the 2019 season. However, that train could come off the tracks when they head to Foxborough in Week 8 to take on the Patriots on the road, and you better believe football fans will be chomping at the bit for this game.

Week 8 is the perfect time for this game to happen for so many reasons, as it gives the Browns enough time to build up the chemistry between Baker Mayfield, Jarvis Landry and Odell Beckham, Jr., and allows the Patriots the chance to figure out their offense without Rob Gronkowski.

It also provides enough time for both teams to be closer to their peaks, rather than throwing this high-quality matchup on the schedule in Week 2 or Week 3, which is more important than some may realize.

If the Browns are what everyone is cracking them up to be, this could serve as a unique spot for a changing of the guard, similar to if the Chiefs had knocked off the Patriots in either of the two teams’ battles in 2018.

If not, you’ll still have an uber-talented Browns offense going up against the stingy Patriots defense, and that’s enough for me to want to watch.

It seems like the Colts are hyped up every year and rarely meet the expectations set for them (except for 2014), but 2019 may be the year that Andrew Luck and his offense break out in the AFC.

However, in order to do that, they’ll have to battle through a tough schedule, starting out with the Chargers in Week 1 on the road, who tied the Chiefs for the best record in the AFC last year and got stuck as a Wild Card team as a result.

The schedule doesn’t get any easier throughout the year, with a big game to circle on the calendar once December rolls around: Week 15 against the Saints on the road.

The Saints return most of their team from last year that took them to the NFC Championship game, and they’ll certainly be operating with a chip on their shoulder throughout the 2019 season after the controversial call that turned the tide against them in that game.

The Colts could be running into the equivalent of a tidal wave late in the year, but this could turn into one of the games of the year if both teams reach the potential that they should this season with equally high-powered offenses. Andrew Luck vs. Drew Brees. T.Y. Hilton vs. Michael Thomas. Who comes out on top?

The NFC is loaded these days, and the Bears are a team who are certainly on the rise with Mitchell Trubisky evolving under center and Khalil Mack leading the charge defensively. However, can they take down the defending NFC champions when they take on the Rams in Week 11?

This game could shift down the totem pole if either of these teams doesn’t live up to the hype in 2019, but with the talent level that the Bears possess defensively, and the offensive prowess that carried the Rams to greatness last season, this one should turn into a real “Clash of the Titans” in California.

Plus, don’t think the Rams forgot about the “L” the Bears handed out in Chicago last December, only adding to the stakes in this primetime matchup in November.

The Chiefs and Bears feature two of the league’s great young quarterbacks in Patrick Mahomes and Mitchell Trubisky, respectively, and each could be seeing each other quite a few more times in the league’s future.

However, much like the Bears’ win over the Rams last December in Chicago, this could turn into a close defensive battle that shocks those following the Chiefs’ journey in 2019.

There are so many different elements to watch out for in this late-season tilt, and here’s hoping both teams still have something to compete for to ensure no stars are on the bench for this major matchup. 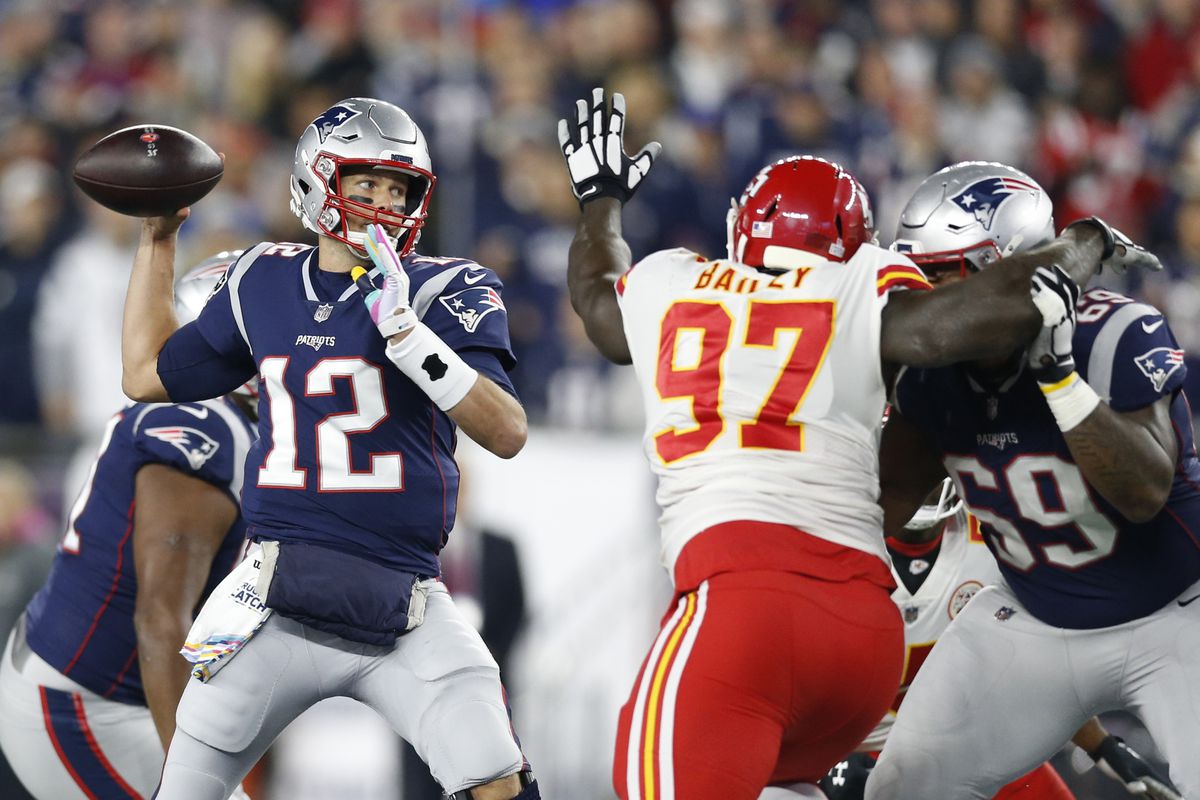 Much like the top game on this Pick-Six, the second spot on this list is a rematch of a conference championship game from last year, and if the two teams’ previous two matchups in the 2018 season are any indicator, fans are in for a treat in Week 14.

The Patriots and Chiefs have turned into one of the league’s great new “rivalries” so to speak, although there certainly aren’t any hard feelings between the two teams, especially with their quarterbacks. Patriots quarterback Tom Brady evidently has a ton of respect for Patrick Mahomes, especially after the Chiefs quarterback took home league MVP honors last year and almost took him out of the postseason equation in the AFC Championship game.

However, with Brady’s career winding down over the next few years, we may be seeing some of the final battles between the G.O.A.T. and the MVP, so this one will surely be a game to remember.

Now, Bill Belichick and the Patriots will try to pull off a trifecta against Andy Reid and the Chiefs, hoping to gain some serious ground in what is sure to be a battle for a top seed in the AFC when Week 14 rolls around.

This game could be the biggest on this year’s NFL schedule solely off the possible shade that could be thrown with the addition of challenges for pass interference calls, and that’s just one of the intriguing elements in this matchup.

A rematch of last year’s NFC Championship game with two of the conference’s best offenses, all featuring most of the same talent from the 2018 season’s rosters. Add in some new, big names for the Rams like Dante Fowler, Jr., Clay Matthews and Eric Weddle in their first few weeks with the team, and there’s some serious talent to look out for as these two squads square off on the West Coast in Week 2.