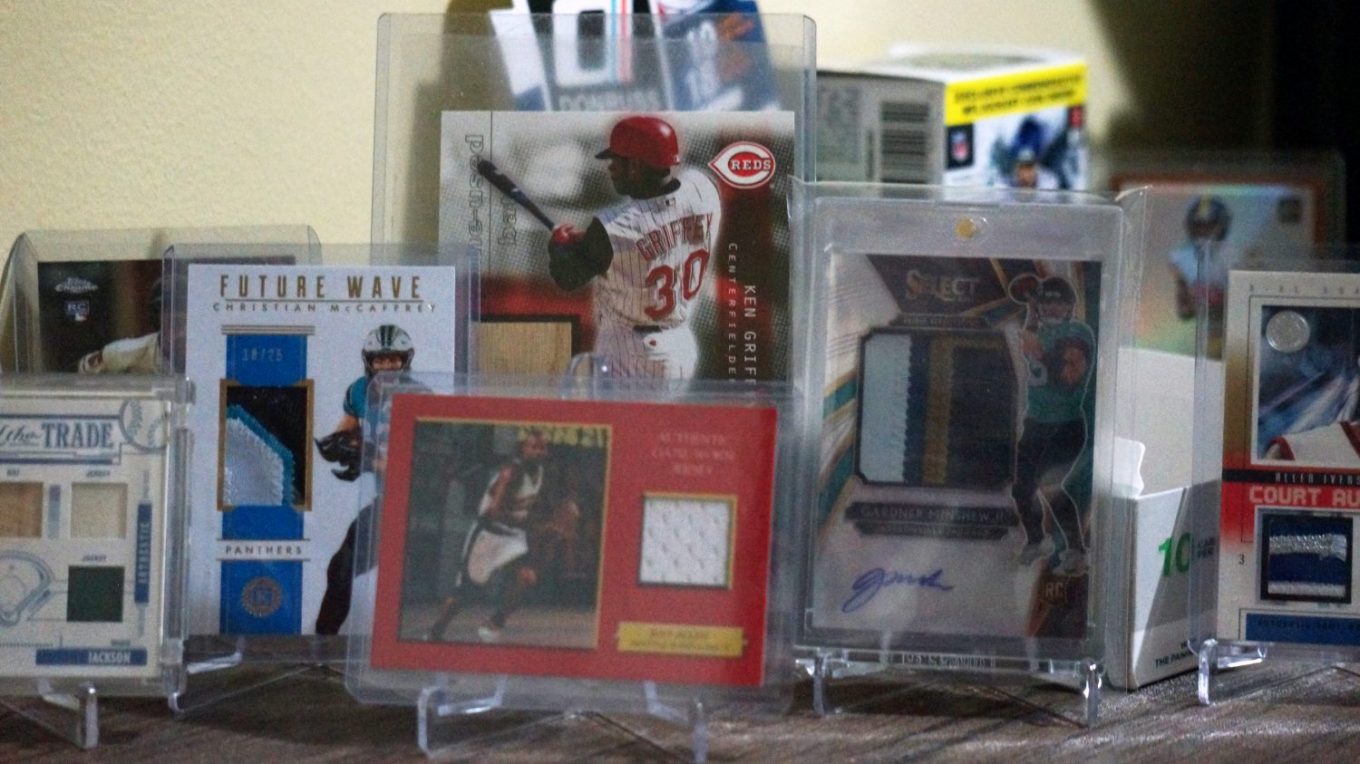 When the COVID-19 pandemic hit the United States in March, many across the country were impacted in different ways. Some found themselves working from home full-time, while others had their business operations shut down due to stay-at-home advisories and social distancing.

No matter the situation, however, almost everyone found themselves in the same boat: more free time at home with no commutes or work to do, and a need to dive in on hobbies to fill the void.

Enter sports cards. While the hobby has been around for decades, business picked back up in recent years. Collectors have been able to utilize eBay, online stores or a variety of social media platforms to buy, sell and trade cards and boxes from any year, and some have even used the hobby as a tangible means of investing their money.

Many online were able to use the hobby as a means of income, whether it was a card store selling products via virtual stores, a collector opening boxes on their YouTube channels, or “breakers” ripping boxes and shipping out cards to customers after the fact.

So, when the COVID-19 pandemic sent people back to their homes for more hours of the day, people around the country got back into the hobby. Then, everything changed.

As FOX Business’ Kristina Partsinevelos said, “the lack of televised sports and a growing nostalgic feeling in America has fueled a sports cards and memorabilia renaissance.”

Fresh blood flocked to the Internet to get back into the game, buying both current products from the 2019 seasons and older products from previous years. To meet that demand, savvy collectors went to retail stores like Walmart or Target or their local card stores (LCS) to buy out what they had.

How much have prices gone through the roof? Try double in most cases, if not more.

A hobby collector’s box of 2019 Optic Football, which had a suggested retail price of $49.99 when it first released and was created as the middleground between a retail box and a hobby box, consistently sells for approximately $100 on eBay as of May 2020. The hobby box for that same product went for $127 on March 5, 2020, and sold for $270 on June 2.

The combination of a star studded rookie class with a limited print run and the iconic chrome sapphire design has caused prices of 2019 Topps Chrome Sapphire to rise drastically since it released last September. With minimal boxes remaining and the anticipation of baseball returning, will these prices continue to rise? Grab a box today on StockX!

The real moneymaker, however, comes on the court with basketball cards.

The problem isn’t exclusive to hobby boxes, which generally yield more “hits” like autographs and memorabilia cards due to their higher price point. Shelves at retail stores are struggling when it comes to restocking, and most products are seeing similar price increases as their hobby box counterparts when sold online.

“Retail is typically wiped out as far as it’s concerned with newer releases,” Texas native Mathew Slaybaugh said. “Presumably, people have more time on their hands at home, and/or people are finding that it’s a good flip online. Hobby boxes for 2019 and beyond are incredibly priced higher than usual.”

>>RELATED: Pick-Six: Most iconic Jordan shoes of all time

For those who open up those boxes for subscribers on YouTube as a way to preview products online before consumers jump to buy them, COVID-19 has been a blessing and a curse.

More people at home leads to increased viewership due to the added free time, but the availability and the price points for the products make it tough to break a profit with the generated ad revenue.

Packman, a popular card collecting channel on YouTube with more than 37,000 subscribers and more than 14,000 Instagram followers, said the recent trends almost took him out of the game.

“It’s been positive to a degree because everyone, including myself, was stuck at home, so we were able to hop on streams together and more people had time to watch videos I posted,” Packman told The Swing of Things. “The downside is stuff got so expensive that it was tough for me to keep posting consistent content. I got it done, but the massive price jumps almost priced me out.”

Packman also hosts box breaks on his channel, a popular medium for collectors to utilize online. In a similar scenario, however, breaks found themselves looking at both upsides and downsides as the pandemic progressed.

Breaking turned into a big business online after COVID-19 shut down parts of the United States, as people looked to enjoy the rush of opening packs while practicing social distancing. Chris McVay, one of the brains behind Buck City Breaks (BCB), told Sports Illustrated in May 2020 that the month of March brought record sales for the site, and said they were on track for even more in April.

“With retail basically being barren, breakers are really my only option to get newer cards,” Slaybaugh, a frequent flyer when it comes to the “BCB Fam,” said. “I don’t have an LCS near me, nor do I have the money to pony up for a hobby box.”

Lopez, another member of the “BCB Fam,” said the breaking process allows for viewers to connect with both those opening packs and viewers in the channel’s chat. McVay echoed that sentiment when the Buck City Breaks founders told Sports Illustrated the channel is “kind of like a sports bar now.”

>>RELATED: Increased production: A new trend for athletes as the demand for content continues to grow

“It’s just the personal feeling of the breaker knowing you and talking with you, similar to a hangout,” Lopez told The Swing of Things. “Especially with COVID, you can stay at home, open a beer and enjoy the break and have laughs and stay safe.”

William Seward, owner of Raccoon Alliance Breaks told The Swing of Things that the upstart breaking company has built up quite the audience since its creation in January 2020, with “about 130 repeat buyers who when they see something they like, they buy in.”

“We have a solid group of guys that buy into our breaks,” Seward said. “I don’t believe COVID has affected them to buy in. Some folks have mentioned over the past two months they need to take a break due to finances, and I try to answer every one of their tweets or DMs as we know the hobby is an expendable income expense.”

Seward has built up a similar community as the “BCB Fam” with his Virginia-based business, and the hockey fan has hosted virtual calls for collectors to chat and connect in the new normal created by COVID-19.

“We’ve had two Raccoon Alliance Breaks Zoom meet-ups during COVID,” Seward said. “Who else is doing that?”

One impact behind the scenes for breakers and consumers alike comes in the area of supplies. Yes, the boxes count as supplies in this case, but protective elements for the cards like toploaders, sleeves and magnetic plastic cases began to become scarce, as well.

“For a while, supplies were thin,” Seward said. “We just had to find a supplier for toploaders, sleeves, etc. We found one and were able to order all we needed.”

As the months continued to pile up throughout the pandemic’s progression, things began to slow down on a lot of fronts financially, both for customers and the businesses they’re buying from.

“Recently, we have noticed a slowing down of buy-in spots,” Seward said. “But I think it’s a lull in the waves of ups and downs as far as breakers go.”

The breaking trend may be the way of the future for many collectors as prices for packs and boxes continue to rise. For some, however, the desire to support their favorite card shops has continued throughout quarantine, especially with the impacts of the pandemic on small businesses across the country.

“I still go to my LCS with masks on,” Lopez said. “COVID has affected millions and small businesses are struggling to stay open, so I try to spend here and there at a few locations.”

But, for those without a local card store and nothing in stock at retail stores in their area, increased prices significantly decrease their ability to buy boxes. So, they have to seek out what they want, rather than hoping for the feeling of pulling the card themselves.

“If prices remain how they are for hobby boxes, as well as retail being the way it is, I think I’ll be buying a lot more of the cards I want just off of eBay or Twitter, as well as jumping into breaks when I can,” Slaybaugh said.

If collectors decide to stick it out and not let the hobby price them out completely, their techniques for getting new products may need to change. If so, a new era of the hobby may begin shortly after the recent rejuvenation, both due to the impacts of COVID-19.

In the end, for Slaybaugh and many others, that new era may permanently take away the act of opening packs, and change the market for sports card collecting altogether.

The Swing of Things Sports card collectors adjust to COVID-19 challenges as some begin to feel priced out of the hobby
%d bloggers like this: