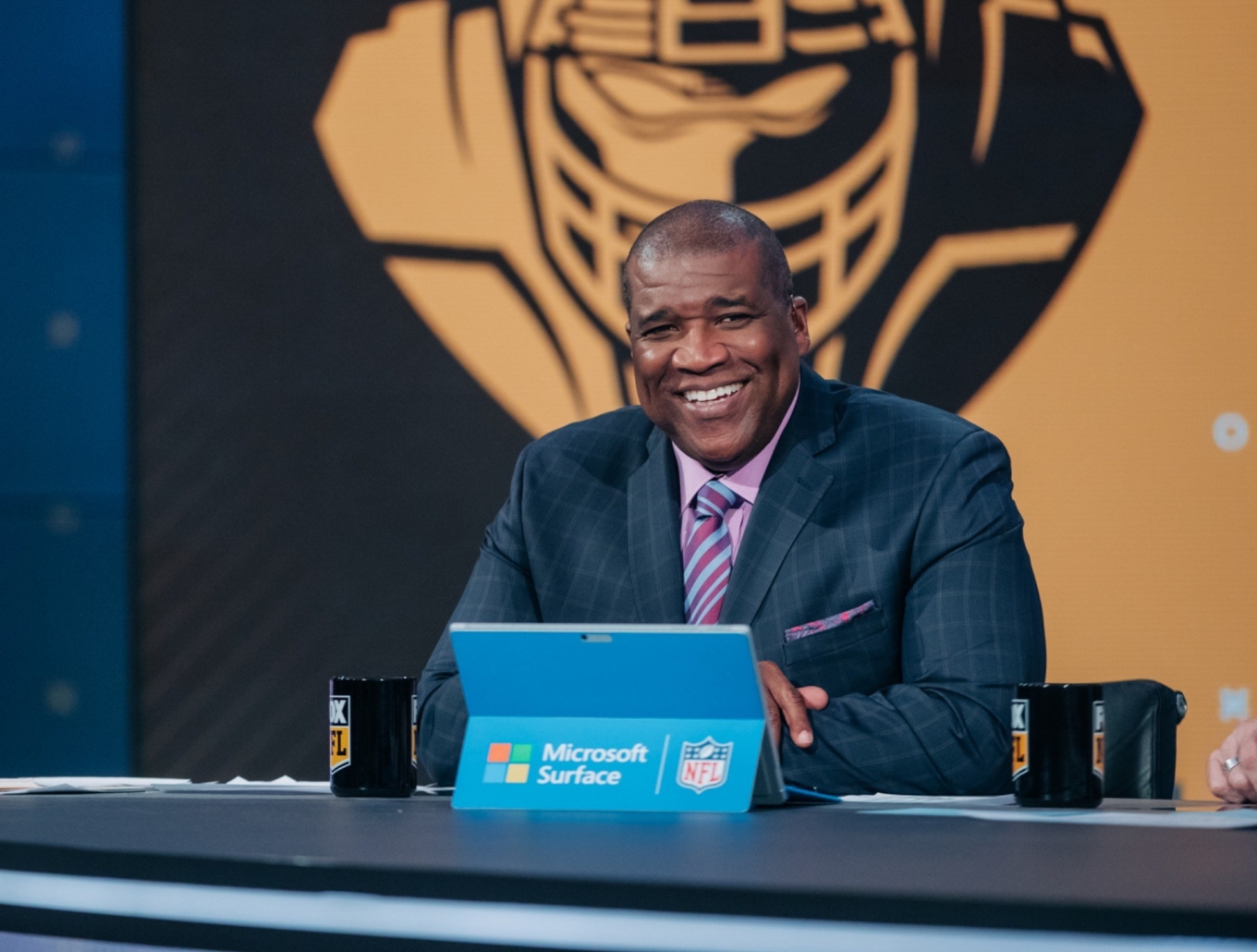 When 2020 first began, FOX Sports’ Curt Menefee had a loaded calendar with a lot of variety on his plate.

The NFL was about to start its playoffs, and FOX was preparing for Super Bowl LIV on their air. While Menefee continued his work as a host on FOX NFL Sunday, America’s most-watched pregame show, he had a new challenge on the horizon: doing play-by-play for the XFL’s first season since the league’s relaunch.

“Normally after the Super Bowl is over, that’s kind of my free time for the most part, until training camp starts,” Menefee told The Swing of Things. “Pretty much, I have February, a couple months off. So, I do a big vacation. Go somewhere internationally, my wife and I, usually about four to six weeks.”

“Well, this year, I was doing XFL play-by-play for FOX, and I started six days after the Super Bowl. So I was working, and I’m like, ‘Okay, well I’ll get my vacation in in May and June.'”

Like many across the world, plans changed in the blink of an eye when March rolled around, with the COVID-19 pandemic shuttering businesses and operations across the United States and numerous other parts of the world.

The NBA and NHL suspended their seasons, MLB postponed Spring Training games and delayed the start of their regular season, and the XFL was forced to shut down just over a month into their first season in almost 20 years.

“I was on a weekly schedule, doing play-by-play, going to games and traveling the country, and all of that came to a sudden halt, like everything else did,” Menefee recalled. “It kind of stopped me in motion from a gig I was doing that I was really enjoying. Now, it’s just like everybody else, just sitting here waiting and trying to figure out, ‘When do we go back to work on a regular basis?”

Like other analysts and reporters across a multitude of sports networks, Menefee’s work didn’t stop when the virus sent non-essential workers home.

“It’s just me and the guys from the show basically just getting together, talking a little football, about what’s going on, whether it’s the [NFL] Draft or looking at the free agency moves teams have made,” Menefee said. “It’s been good to kind of see those faces, talk a little football and try to have a little normalcy if you will. Bring a sense of normalcy to some of the fans and viewers a little bit, as well.”

The show adds to a laundry list of responsibilities that have turned Menefee into a “jack of all trades” throughout his tenure in sports media. But, things have changed since Menefee started his career more than 30 years ago, following his graduation from Coe College in Cedar Rapids, Iowa.

>>RELATED: “Answers to the Test: The State of Sports Journalism” Documentary

“It’s a weird thing in that there’s more jobs and more outlets, yet it’s not taken nearly as seriously as it was before, and it’s more of a ‘What can we do to get your attention now’ business than I think it was back then,” Menefee explained. “You look at the ’80s and ’90s even, those shows and even in talk radio. Yeah, you talked about rumors and stuff, rumors about, ‘well, should this guy be traded to that team or that guy?'”

“Now it’s all about, whether it’s personal lives or whether it’s something to throw out there to get clickbait, or to have a hot take so you can stand out from the crowd because there are so many voices out there.”

As they say, “the more things change, the more they stay the same.” Despite all of the shifts in the business, Menefee has become a mainstay at FOX over the last two decades, and attributed some of his longevity to the network itself.

“We’re fortunate that we’re the most stable place I think there is, certainly as far as football goes,” Menefee said about the network. “I mean, Michael Strahan is the ‘new guy’ on our set, at least full-time for the pregame show. Tony Gonzalez comes in and does halftime and later in the day when Jimmy [Johnson] goes home. But, on the pregame, Strahan is the young guy, and this will be his 13th year.”

“Other places are changing every other year or two and rotating crews, so I think that stability has a lot to do with it.”

The reason for that stability in the studio? It’s simple in Menefee’s mind: it has to do with the quality of the content, and the network’s analysts themselves.

“I think people at home like that and they respect that, because people don’t have to agree with you at all times. But, I think they believe that if you do truly believe what you’re saying, they’ll support it.”

One thing many sports fans can agree on is the love of a great success story. The simple joys of a big playoff or championship win, or a team’s miraculous comeback from dire circumstances in a specific game or season. The incredible rise to glory for an underdog athlete, and the emotional journeys some sports stars go through en route to the big leagues.

In Menefee’s cases, the same spotlight should be put on those on the other ends of those triumphs. The player who gives up the go-ahead basket in a playoff game, or the coach who makes the wrong decisions and leads their team to an unfortunate loss.

The 54-year-old believed in that mission so much, that he literally wrote the book on it. The author of Losing Isn’t Everything: The Untold Stories and Hidden Lessons Behind the Toughest Losses in Sports History, Menefee took a deep dive into athletes and coaches who are defined for being on the wrong side of sports’ toughest defeats.

“It’s one of those things that you see the highs and the lows, we always celebrate and we watch the documentaries years later, and we hear about the teams and the people that won and their story and how great it is. But what ever happened to the people that lost?”

“It was one of the things that always crossed my mind, because I think that the people that lose, we have more to learn from them than the people that win in some respects,” Little said. “We all have situations that we can’t control, that we lose our jobs, or we get divorced, or someone passes away, or whatever, and we have to bounce back from that adversity.”

“These people have lost on the biggest stage, and for many of them, it’s what they’ll be remembered for,” Menefee continued. “A lot of them were in their 20s and they’ve still got another 50 or 60 years to live, so how do you balance that out and go forward with your life? What lessons do you take to move forward and make yourself a better person?”

Those life lessons are important for Menefee, and they’re pieces of knowledge that he passes on to anyone working through important moments in life. He imparted that wisdom to graduating seniors when giving commencement addresses for his alma mater, both in 2010 and 2020. And, he offered that advice when asked about what to tell those currently getting into sports journalism in a year impacted by a global pandemic.

“You have to figure out what the lessons are that you can learn out of the adversity that goes on right now,” Menefee said. “It goes back, being the ‘jack of all trades’: the more you can do, the more you’re going to be able to navigate the waters that are ahead. I don’t think anybody truly knows the direction of, not only this business, but any business.”

“I think it’s just a matter of being flexible, being able to negotiate your way through a lot of different situations,” Menefee continued. “A lot of these kids, you’re 20, 21, 22 years old, and your whole life has been built around, ‘Okay, I’m going to graduate from college, and then…’ Well, now, ‘And then…’ is happening, but, ‘And then…’ is not the same as the ‘And then…’ you planned for. You’ve got to be able to adapt and move forward in a totally different situation.”

Menefee frequently references a quote from Lennart Meri, the first president of Estonia following the declaration of independence from the Soviet Union: “The situation is shit, but it is the fertilizer of our future.”

“I think that’s a great way to look at things,” Menefee said. “When times are tough, let me figure out how to use this to blossom and to bloom and to be better and make my life better going forward. Sometimes it’s a struggle and takes a lot of work, and it’s not easily done, but you’ve gotta find a way to do it.”

3 thoughts on “Jack of all trades: Curt Menefee continues to adapt in third decade with FOX Sports” Leave a comment ›

The Swing of Things Jack of all trades: Curt Menefee continues to adapt in third decade with FOX Sports
%d bloggers like this: