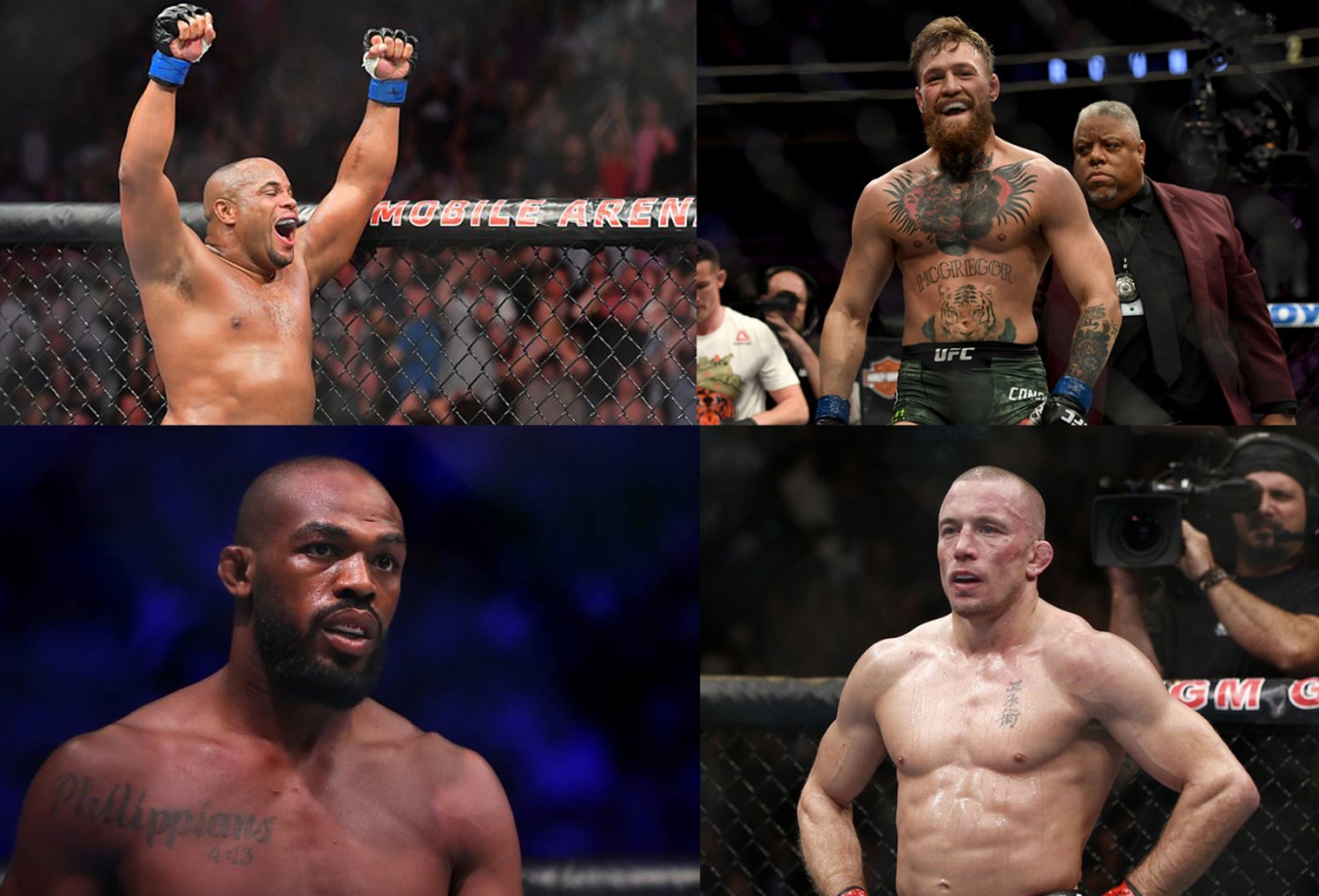 Just like any other sport, the debate for the top UFC fighter of all time has been raging on for years, and it’s a more complicated conversation than most.

Unlike in baseball, basketball, football or hockey, not everyone is on a level playing field when it comes to MMA. Between different weight classes, companies and styles, no fight in the Octagon is created equally, and therefore, no list when it comes to the G.O.A.T. will ever be exactly the same.

However, you can’t truly knock it until you’ve tried it, so it’s time to break out the history books and take a stab at narrowing down the top six UFC fighters in the company’s history.

As we’ve been doing recently, we’ve got a few honorable mentions to add for those who were on the fringe for this historic list.

For starters, it’s tough to look back on the UFC’s past without focusing on two legends in the Octagon: Chuck Liddell and Randy Couture. Liddell started his career with a 12-1 record before taking a loss at the hands of Couture for the interim light heavyweight title. He finished with 21-9 career record in MMA, and one title reign at light heavyweight that featured four defenses.

Couture ended up advancing to 11-5 with the win over Liddell, and wound up as a three-time heavyweight champion and a two-time light heavyweight champion (with one interim run, as well) with a 19-11 record. The two were both inducted into the UFC Hall of Fame, and could both be considered the main names that brought the UFC into the limelight in the sports world.

Meanwhile, you have to mention Jose Aldo as one of the greats when you talk about the UFC. Life in the Octagon hasn’t been kind to him since his shocking loss to Conor McGregor at UFC 194, but he was 25-1 entering that monumental fight. He’s 3-3 in the cage since that 13-second loss, but had a dominant run for the company from April 2011 to December 2015 that included wins over Frankie Edgar, Chad Mendes and Kenny Florian.

Add in his wins over Urijah Faber, Cub Swanson and numerous other victims before entering the UFC, and the fact that he holds the most consecutive title defenses in UFC featherweight history, and you’re talking about a resume that any fighter would love to come close to.

Spoiler alert for anyone reading this: Matt Hughes holds a victory over the fighter I deemed the G.O.A.T. on this list, and that propelled him into taking the opening spot on this Pick-Six.

Over the span of his career, Hughes amassed an insane 45-9 record in the cage, and went 13-1 to start his time with the UFC. He tallied seven total welterweight title defenses with the UFC, with five consecutive defenses between March 2002 and January 2004.

The two-time welterweight champ was dominant throughout his tenure, with elite wrestling skills and the ability to make fighters tap with his superior submissions or go to sleep with his strong striking.

Anyone with wins over Georges St. Pierre (*wink*), B.J. Penn, Royce Gracie and Matt Serra is a legend in my book, and worthy of consideration for the UFC’s best of the best.

This may seem drastic given the fact that Conor McGregor hasn’t done much recently, but even if the train is off the tracks for good, you have to appreciate what the Irishman has done to popularize the business in the last decade.

Between his legendary mic skills, his ability to back it up against a legend like Jose Aldo, his classic fights with Nate Diaz and his win over Eddie Alvarez to become a double-champion, McGregor’s done it all for the UFC. He’s accomplished so much in such a short time that he had to test himself in a whole new endeavor, stepping into the boxing right to fight one of the sport’s own greats, Floyd Mayweather.

The thing that has and will continue to hold McGregor back as one of the sport’s greats? Himself. There’s his dolly throw in 2018 during the drama with Khabib Nurmagomedov, followed up with the brawl that broke out after the two fought in October a few months later. Or, you could talk about his lack of fights over the last three years after he fought 10 times in his first three and a half years with the UFC.

McGregor’s held himself back since he beat Diaz in the duo’s rematch, and could’ve gone down as a top-three fighter if he had stayed consistent with the rapid pace he was on to start his tenure with the UFC. Instead, his impressive rise and marketing techniques land him in the fifth spot on this list.

I’ll admit it, I wasn’t huge on Daniel Cormier until after his second fight with Jon Jones wrapped up, but D.C.’s been a huge factor in the UFC’s growth over the past few years, and he’s been piling up some big wins towards the end of his career to solidify his legacy.

It’s always easy to compare wins and losses when it comes to UFC fighters, but the most telling thing about Cormier’s career has been his ability to bounce back from a big loss and take two steps forward after the dust clears. Lost his first fight against Jon Jones to take his first L in his MMA career? Came back and beat Anthony Johnson (twice), Alexander Gustaffson and Anderson Silva.

Fought Jon Jones again and lost (kind of, before the fight was ruled a no contest)? Returned to defend the light heavyweight title against Volkan Oezdemir, then jumped to heavyweight and beat the division’s best of the best in Stipe Miocic for a second title before dominating Derrick Lewis in his first heavyweight defense.

Everyone will wish he could’ve fought Brock Lesnar, and the cards are still on the table for a potential trilogy fight with Jon Jones at either light heavyweight or heavyweight. But, if Cormier decides that it’s time to call it a career after his rematch with Miocic, he’ll still go down as one of the best fighters in the company’s history, and could further his spot on the list with a big win over one of the best heavyweights the UFC has ever seen. 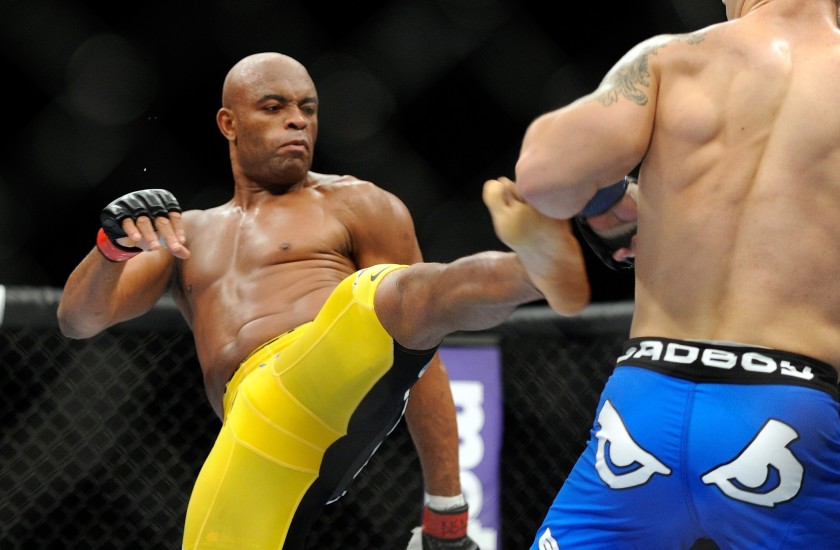 I was shocked myself when I was compiling this list and found that I had Anderson Silva as third in the debate for the best fighter to ever step foot in the Octagon, but I won’t second guess myself when it comes to his placement.

Silva’s dominance over the span of his career is tough to replicate, and only the two fighters in front of him on this Pick-Six can really step up against him as far as his resume is concerned. But, I think his laundry lists of fights on his record may actually hold him back in the long run when it comes to this conversation.

The Spider’s only won one of his last eight fights, after going 33-4 to start his career. While his wins include victories over big names like Dan Henderson, Chael Sonnen, Rich Franklin and dozens of other great fighters, his losses have begun to rack up as his career winds down.

You could argue that those last eight fights really don’t matter, and that it hasn’t been the same Silva since he lost his title due to his own arrogance against Chris Weidman in their first fight, but you can’t consider someone the G.O.A.T. when they’ve lost to a name like Jared Cannonier. No offense, Jared Cannonier.

>>RELATED: Where does UFC 239 stack up against best UFC cards of all time? 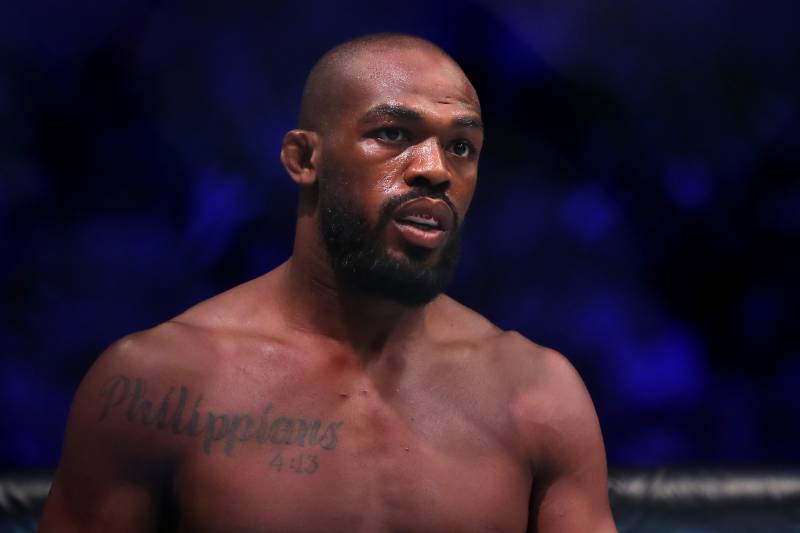 This may come across as controversial to some for a wide variety of reasons, and may anger fans on both sides of the argument.

For those saying he’s too high because of his troubles outside of the sport and his drug tests inside of it, you can’t knock what Jon Jones has been able to do in MMA when his head is on straight and he’s fighting like he should be. Sure, there are asterisks on some fights or stains on others for his behavior, but he’s the most dominant light heavyweight of all time, and that’s tough to argue against.

Then, for those who think he’s already the greatest fighter of all time and is too low on this list, there’s reasoning to counter that, too. Sure, he’s been incredible every time he’s stepped into the Octagon, and he hasn’t really been defeated outside of his own mistakes. There’s still plenty of time for him to further his legacy and become the G.O.A.T., but I think there’s not enough there as far as talent that he’s defeated to outweigh what he’s been through. Plus, there’s no one around him in the division currently that could add to his legacy, which makes things more difficult.

Add in one last win against Daniel Cormier, or a jump up to heavyweight for some competition, and we may have a different conversation on our hands in a few years.

Many people would put Anderson Silva in this top spot on the list, and others may take a risk and throw Jon Jones into the fray with his current dominance in the cage. However, as far as consistency and sheer talent, there’s no one better than Georges St. Pierre.

Whether it’s his wrestling, striking, submissions or overall mentality and IQ in the Octagon, there’s no better all-around athlete than GSP. His resume includes a who’s-who of UFC greats, whether it’s B.J. Penn, Matt Hughes, Matt Serra, Michael Bisping or countless others. Plus, he’s avenged his lone two losses in his career against Hughes and Serra, so he holds the trump card over everyone that’s stepped into the cage with him.

The biggest thing that sticks out to me about St. Pierre? He knew when to step away and left on top. Sure, you can argue winning the belt against Bisping and leaving may not have been the right play, but the man was near perfect in his time in the Octagon, deserves to change his initials from GSP to G.O.A.T.

14 thoughts on “Pick-Six: Best UFC fighters of all time” Leave a comment ›