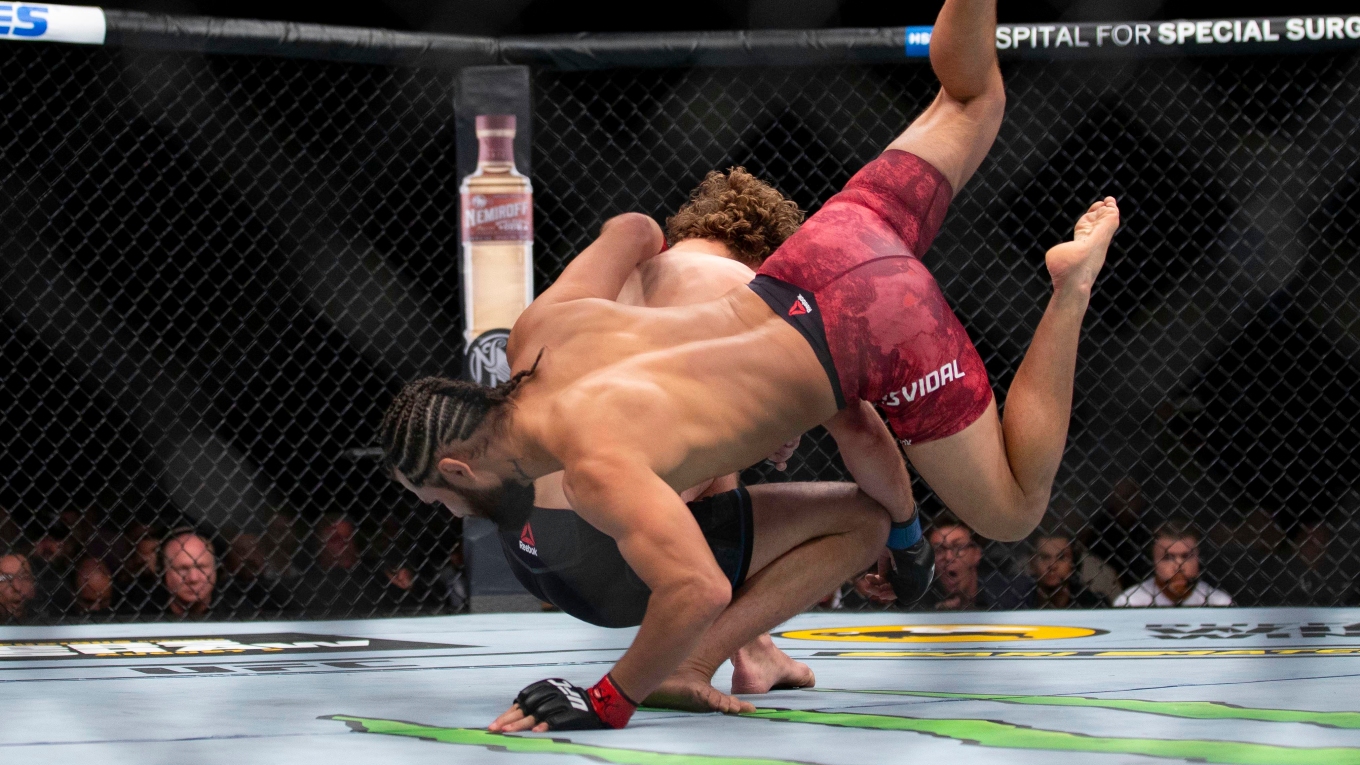 UFC 239 included the fastest knockout in the organization’s history, another incredible finish from Amanda Nunes and a main event featuring Jon Jones’ first real test in a long time in the form of Thiago Santos. But, where does the card rank in terms of the best UFC cards of all-time?

Not many cards have been more well-rounded in the last few years as UFC 239’s card was, with two title fights featuring the two best fighters in each gender’s history: Jones and Nunes.

But, before fans could even get to those fights, they were treated to not one, not two, but three incredible finishes in some amazing matchups to get the energy going in the building.

First, we saw a passing of the torch between two Ultimate Fighter winners in Michael Chiesa and Diego Sanchez. While it was a dominant performance from the younger Chiesa in his new weight class, Sanchez showed off his heart in gutsy fashion by taking everything his opponent could toss at him, and then some, before eventually falling to his foe.

Next up, UFC fans in attendance witnessed a knockout that, if the next fight hadn’t happened, could’ve been among the contenders for the best knockout of the year. Luke Rockhold, also in a new weight class, got rocked by a powerful punch from Jan Błachowicz in the second round, who turned the lights out for the UFC veteran and former middleweight champion.

As if those two fights weren’t enough, the people’s main event lived up to every single bit of hype and then some, as Jorge Masvidal and Ben Askren finally went at it in the Octagon. Well, they went at it for a record-breaking five seconds, as Masvidal landing a devastating flying knee to knock Askren out cold, followed by a few extra punches for good measure to seal the deal.

The energy in the building for that knockout was arguably the best you’d ever seen while watching a UFC event, with the crowd buzzing from the second the fight started, through the second Masvidal clocked Askren with his knee, all the way through the celebration and aftermath. It was arguably, timed element aside, a greater finish than Conor McGregor knocking out Jose Aldo in 13 seconds, and left everyone with their mouthes wide open.

And, to add even more punishment to the card, Amanda Nunes continued a spectacular stretch in the UFC record books by knocking out a legend in Holly Holm, using Holm’s own signature head kick to do so in spectacular fashion. If the UFC and ESPN can’t make Nunes a star now after the dominance she’s shown, I don’t know what else could possibly make it happen.

Last, but definitely not least, Jon Jones finally got a real test in a main event for his light heavyweight crown, with Thiago Santos helping to write the blueprint for a future opponent to take down the UFC’s G.O.A.T. Had Santos’ knee not been as beat up as it was, we could be telling an entirely new story after this event, with a clear new top dog when it comes to the UFC’s best cards of all-time.

This card certainly doesn’t match up with UFC 189, and there’s a new soft spot for cards like UFC 217 at Madison Square Garden, but UFC 239 should be remembered as one of the company’s best events in the last five or 10 years, and will hopefully set the tone for some great pay-per-views in the ESPN+ era.

5 thoughts on “Where does UFC 239 stack up against best UFC cards of all time?” Leave a comment ›

The Swing of Things Where does UFC 239 stack up against best UFC cards of all time?
%d bloggers like this: