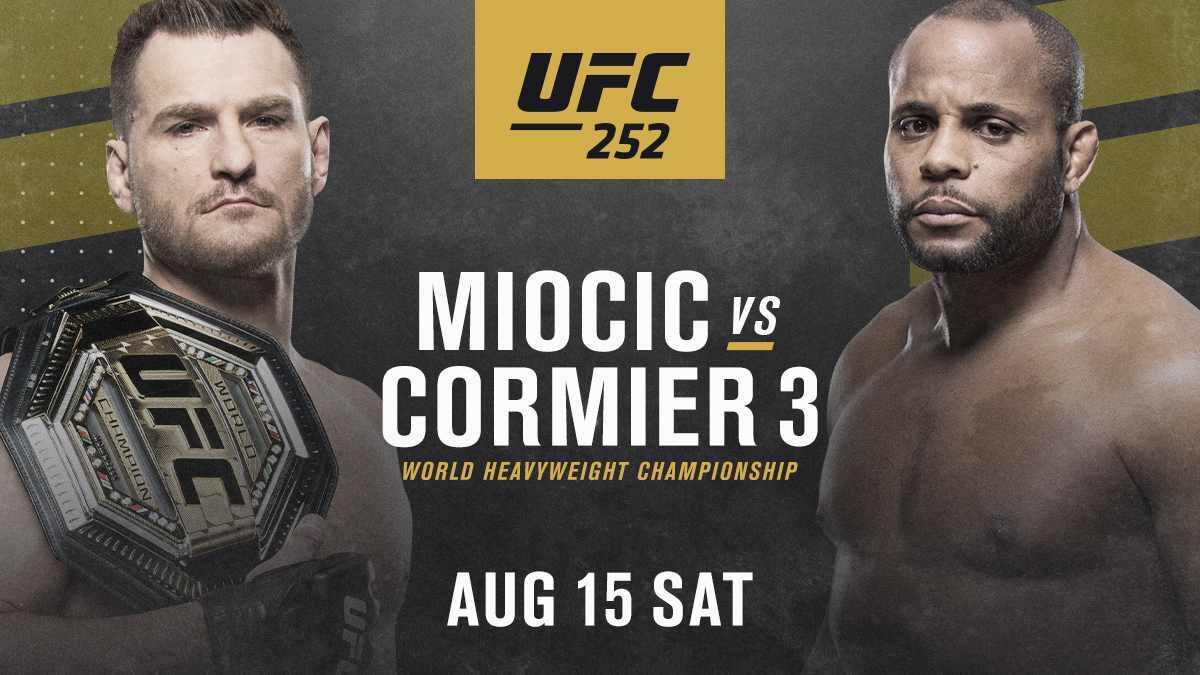 On August 15, 2020, UFC 252 will go live from the UFC APEX in Nevada, and will serve as the setting for one of the biggest fights in UFC history.

Almost a year to the day of their last battle inside the Octagon, UFC heavyweight champion Stipe Miocic and challenger Daniel Cormier will go toe-to-toe in the finale of a rivalry that will simply be remembered as “The Trilogy.”

When the door locks behind them and Miocic and Cormier square off in the center of a fan-less arena, the two titans will be looking to leave with both a championship belt, and a different type of title to add to their resume. That title? The greatest UFC heavyweight of all time.

For a fight like this, you can’t just focus on the present, or even the uncertainty regarding each fighter’s future with the UFC. For a bout this legendary, you have to understand the history between the two stars, and the implications created by those memories.

It all started back in 2018, when it was announced that Miocic, in his first run with the UFC heavyweight championship and coming off of a record third-consecutive title defense, would battle Cormier in July at UFC 226.

Miocic, disappointed in January of 2018 by what he felt was a slight regarding the UFC’s promotion of him and his title run, had just defeated an up-and-coming challenger in Francis Ngannou in dominant fashion at UFC 220, and looked to solidify himself as the greatest heavyweight in the company’s history.

The two were on a collision course towards each other, with Miocic aiming for more history, and Cormier hoping to change the meaning of “D.C.” from “Daniel Cormier” to “Double Champion.”

On July 7, 2018, the two met in the main event of UFC 226, billed as “The Superfight” in front of a raucous crowd at the T-Mobile Arena in Las Vegas, Nevada.

After months of build-up, the fight did not disappoint, but did not last long at all. Four minutes and 33 seconds into the first round, Cormier rocked Miocic with a barrage of strikes, and knocked the Croatian champion out for the first time since his last loss to Stevan Struve in 2012.

UFC President Dana White seemingly got everything he could’ve hoped for with the result, as the fan-favorite Cormier added another championship belt to his other shoulder, and got on the microphone immediately after the fight to call out former UFC heavyweight champion Brock Lesnar.

From there, the heavyweight division found itself in an awkward state. Cormier successfully defended his belt against the hot hand in Derrick Lewis four months after winning the title, and was left holding out hope for a big-money fight against Lesnar. Alas, Lesnar never came back to the UFC after the seeds were planted in 2018, with White explaining that Lesnar decided to retire from the sport in 2019.

Meanwhile, Miocic was left to lick his wounds and wait for the dust to settle on that Cormier-Lesnar dream matchup, hoping to get another shot at the heavyweight championship and the title of the “greatest heavyweight of all time.”

Miocic wasn’t going to take another fight outside of a rightfully-earned rematch, especially after some controversy in the UFC 226 main event as a result of multiple eye pokes from the challenger Cormier.

Then, in May of 2019, the former champion got some closure. It was officially announced that he would get his rematch against Cormier at UFC 241 on August 17, 2019.

From the Honda Center in Anaheim, California, a location filled with bad luck for Cormier and his MMA teammates, the 40-year-old champion Cormier would look to defeat Miocic once more, and officially cement himself as the UFC’s G.O.A.T. in the heavyweight division.

Unfortunately for Cormier, that arena proved to be his kryptonite once more, even after a stellar performance in the first few rounds of his second title defense.

Miocic discovered a major weakness midway through the fight, and began to deliver devastating body shots to the champion that started to take a toll on Cormier.

Then, after brutal left hooks to the body and a series of strikes to the head, Miocic knocked out the California native in the fourth round, topping it all off with a victory dance in the center of the Octagon.

The score was evened at one bout apiece, and question marks popped up again as it related to each fighter’s future.

Would the 40-year-old Cormier retire from the sport after such a hard-fought bout, especially after already having to recover from a hand injury to start 2019? Would Miocic be healthy enough to defend the title in a timeline that worked for Cormier? Or, would Miocic himself be looking towards retirement after starting a family in 2018?

For almost one whole year, the heavyweight division again found itself hovering in no man’s land, waiting on next steps for both its champion and the apparent number one contender in Cormier.

Ngannou went on a rampage and tried to make a case for another title shot and Alistair Overeem picked up a big victory over Walt Harris in one of the company’s first events back after the COVID-19 pandemic hit. But, the more that time passed, the more obvious it became as to what Dana White and the UFC wanted to see.

>>RELATED: Jon Jones vs. Francis Ngannou: Breaking down the potential superfight and booking the UFC’s outsiders

Then, the MMA world got exactly what it had been asking for over the previous 10 months. On June 9, 2020, the UFC announced the third installment of a legendary rivalry: Miocic vs. Cormier. UFC heavyweight championship on the line, along with all of the glory that comes with being called the division’s G.O.A.T.

In trailers that followed, the UFC only had to market the fight as one thing: “The Trilogy.”

White agreed with the excitement surrounding the bout, and doubled down on the stakes that Cormier mentioned.

“The truth is, going into this fight with all the hype, one of these two that wins the fight, definitely goes down as the best heavyweight in UFC history,” White said in an interview with ESPN. “They’re both candidates.”

Cormier seems to have a gameplan in place that he feels is a recipe for Miocic’s demise, and knows what he has to do as it relates to mental preparations before the duo’s fight on August 15.

“I will not allow that to happen again,” Cormier told ESPN’s Helwani when discussing Miocic’s body shots from the last fight. “If he ever finds a way to hurt me, I need to fight back like I did in every other instance in my entire life. I didn’t do that last time and it sits with me every single day.”

Cormier also mentioned that he hopes to get back to his roots with his wrestling, something that doesn’t seem to scare the champion heading into the fight.

“We’ve definitely been training wrestling more,” Miocic said in an interview with ESPN. “He said to bring my wrestling shoes. He’ll definitely try to wrestle me, but every fight starts standing, don’t forget that.”

Another element to consider with the trilogy fight comes as a result of the COVID-19 pandemic. When the two heavyweight legends head to the UFC APEX in Las Vegas, they won’t just be fighting in front of an attendance of zero fans, but they will also be competing in a smaller cage.

>>RELATED: Are UFC fights better with no fans in attendance?

The smaller Octagon has been used for recent events held in Nevada throughout the COVID-19 pandemic rather than the usual 30-foot variation, with fans raving about the action that the cage’s size creates. While Miocic said he didn’t want to fight in the 25-foot Octagon, he said it won’t be the defining factor when he battles Cormier for the third time.

“A bigger cage is better of course,” Miocic told ESPN. “It is what it is. I’m not going to cry about it. I definitely tried to get a bigger cage, but it wasn’t in the cards. What are you gonna do? I’m not worried.”

Things will certainly be different when Miocic and Cormier go toe-to-toe at UFC 252, and it goes to show how much things have changed since the duo’s first fateful fight back at UFC 226 in 2018.

The rivalry, which has spanned more than two years at this point, will finally have its final chapter written on August 15, 2020. Now, after all of the uncertainty over the weeks and months prior in the first half of 2020, only one question remains.

Who will come out victorious when Miocic defends his championship against Cormier in Las Vegas, and be called the UFC’s greatest heavyweight of all time as a result?

Like this story? Who do you think will win when Stipe Miocic and Daniel Cormier battle at UFC 252? Let us know by following @SOTSports on Twitter or by liking our Facebook page!

2 thoughts on “UFC 252: Deep dive into the history between UFC heavyweight champion Stipe Miocic and Daniel Cormier” Leave a comment ›