In Ben Askren’s case, the “funk” that helped him accumulate success at the high school and collegiate level on the mat translated perfectly to his career in the cage, and turned him into an MMA legend in the process.

Before his rise in combat sports, Askren grew up as a jack of all trades, dipping his toes in the water on the baseball diamond, soccer and football fields, and even literally in the pool as a swimmer. But, one sport captured his attention unlike any other: wrestling.

“I would say I really attribute it to two things, I guess three,” Askren said. “Number one, I was just combative, so I’m drawn to that type of stuff. Number two, it’s an individual sport and you can control your own destiny, and number three, you have the ability to improve very rapidly if you put the time and the effort in.”

As he grew older, his laundry list of sports began to dwindle in size. He quit baseball in fifth grade to commit to more time on the mat. Then, he decided as a freshman in high school that he wanted to wrestle year-round, leaving football behind in the process.

“At that point, I don’t think it was like, ‘Hey, this is going to be my job someday,'” Askren said. “It’s like, ‘Hey, I want to win a state title, I want to go get a college scholarship.’ That’s kind of what I was thinking at that point in time.”

“At that point, at 14, I don’t think I’m thinking about what I want to be when I grow up quite yet.”

That question would be answered just a few years later, as Askren rose through the ranks in high school and began to wonder about potential college scholarships.

“So two years later, when I was 16, I saw the Olympic Trials in 2000 in Dallas, and I said, ‘Okay, that’s something I want to do. Okay, let me see if I can pursue that,'” Askren said. “That kind of guided me. Obviously, to get to the Olympics, you have to be successful in high school and then generally have a lot of college success, and then eventually make an Olympic team. So, that was kind of my path.”

Askren went on to attend the University of Missouri, winning two national titles during his tenure as a Tiger.

Instead, another possible profession caught his eye as it gained momentum in the early 2000s.

“In 2002, MMA still wasn’t really an option for people, really,” Askren said. “It’s kind of still the dark ages of MMA. So I think maybe 2005, somewhere around there, MMA starts becoming more and more popular. And I don’t think I’m going to fight yet, but I’m starting to have a lot of interest in it. I like the combative aspect of it and everything that goes along with it.”

By the time Askren graduated in 2007, his interest in MMA had grown.

“I remember actively making a decision after 2007,” Askren said. “I won my second NCAA title and I was done with my college eligibility. Okay, am I going to train for the Olympics for the next 16 months or will I just go straight to MMA?”

He decided to continue with his wrestling training, and made history as the second University of Missouri wrestling alum to qualify for the Olympics. He went on to compete at the 2008 Olympics in Beijing, falling short in his quest for a medal.

“After the Olympics in 2008, then it was like, ‘Okay, what do I do now?'” Askren said. “And my decision then was to try mixed martial arts because I figured, hey, if I tried it and didn’t like it, I still have, say, three and a half years to make the next Olympic team.”

“If I didn’t like it, I could go back to wrestling,” Askren continued. “But, I got into MMA and I enjoyed it and I stuck with it.”

Despite a lack of experience, “Funky” Ben Askren made his debut in the cage in February of 2009, defeating Josh Flowers by TKO in the first round of his first fight.

Just over a year later, Askren competed in and won a welterweight tournament for Bellator, eventually earning a title shot against Bellator welterweight champion Lyman Good in October of 2010.

A little more than 18 months after his MMA debut, Askren was a world champion, defeating Good by unanimous decision.

“I was envisioning myself having the success, and a lot of my peers were having success at that point, so I just foresaw it as something I was going to do,” Askren said. “At that point in my life, I was winning everything. Everything I tried to win, I was winning. So it was like, ‘Okay, I’m going to try to do this, and I’m going to win at that, too.'”

Like a DJ Khaled and T-Pain song, Askren just kept on winning, and winning, and winning, no matter what. He moved to 12-0 on his career during his reign of dominance as champion, and it continued through his fight against Andrey Koreshkov in July of 2013 as Askren began to hit his stride.

“When you think about me winning the Bellator title in 2010, that’s literally 18 months after I started fighting,” Askren recalled. “There’s a lot of skills I don’t have, and I tell people this, it’s like, ‘Okay, you get locked in a cage and figure out how to freaking win. That’s all there is to it.'”

“I didn’t know how to throw good punches or elbows, I didn’t know a lot of submissions, but I damn sure was going to figure out a way to win, and I did.”

However, his time with Bellator came to a halt a few months after the Koreshkov fight, as the welterweight champion was released in November of 2013.

A month later, he signed a two-year deal with a different company, ONE Championship, and became their welterweight champion just nine months later in August of 2014.

That reign also didn’t end in a loss for Askren, as he held that belt until November of 2017, when he decided that it was time to hang up the gloves.

Or so he thought.

A year after his initial retirement, The UFC signed Askren in a trade involving UFC flyweight champion Demetrious “Mighty Mouse” Johnson, revitalizing his interest in fighting.

Askren earned a win against Robbie Lawler in his UFC debut in March of 2019, and was put up against Jorge Masvidal for a fight at UFC 239 in July of 2019. 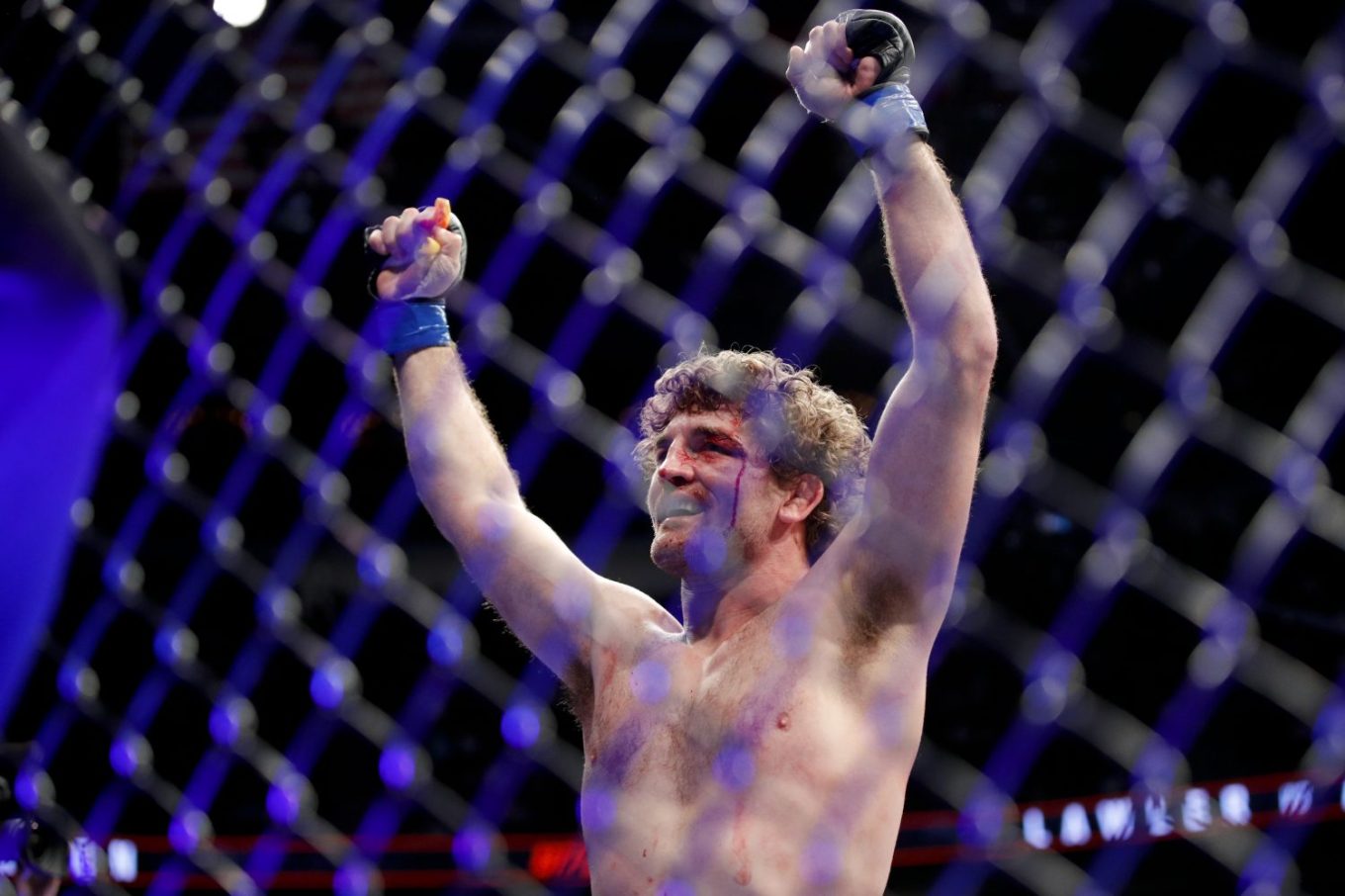 “[Signing with the UFC] wasn’t at an ideal point in my life, and I thought I was still at the point where I could win the UFC title,” Askren said. “Honestly, after that first fight, I’m a Jorge Masvidal fight away from fighting for the title.”

But, in one of the most shocking fights fans had ever seen, Masvidal landed a flying knee that sent the T-Mobile Arena into a frenzy, knocking out Askren in just five seconds, the quickest knockout in the company’s history.

>>RELATED: Where does UFC 239 stack up against best UFC cards of all time?

He then went on to fight Demian Maia in Singapore in October of 2019, losing by submission in the third round. Askren moved to 19-2 in his career as a result, in what would end up being his final fight in the Octagon.

Askren retired at the age of 35, citing the need for a major hip surgery after the Maia fight that ended his tenure as an MMA fighter.

But, as he looked back at his run in the UFC, Askren didn’t have any regrets, saying he felt he “brought life to a lot of the welterweight division” during his time with the company.

“But, there were no choices, right?” he continued. “There was no opportunity, so I fought who I could fight and that was the way it went.”

>>RELATED: The battle outside of the cage: UFC fighters detail the anxiety they face away from the Octagon

Now, Askren labels himself as a commentator and analyst, with his own podcast to go alongside a new position with FloWrestling.

“I knew Flo since their infancy,” Askren said. “Christian [Pyles] just said, ‘Will you be my cohost?’ And I’m like, ‘Are you joking?’ It actually almost happened one time like three years ago or so, and then he offered again, and I said, ‘Okay, let’s do it. It sounds like a lot of fun.'”

Askren’s impact on the wrestling world doesn’t stop there, however. In his retirement, he now has more time to commit to wrestling camps and the Askren Wrestling Academy, which he opened with his brother Max in April of 2011.

“I’ve always just really enjoyed teaching the sport of wrestling, teaching anything in general,” Askren remarked. “I love what the sport of wrestling gives back to kids that are in it, so I did camps for about eight years, and then my brother had the idea to start the Askren Wrestling Academy, which I love.”

Similar to a fighter’s mentality inside of the cage, Askren is focused on the finish. In this case, the former world champion started the academy to follow along with a wrestler’s journey towards the finished product, rather than limiting his time with them to one camp once a year.

The one thing he’d prefer not to see from those he trains on the mat? A pursuit of an MMA career.

“I’d tell them don’t do it,” Askren said. “Don’t do it. MMA’s a terrible job. Maybe if a kid has, like, won a college national title, if they’re that level wrestler, and they want to go do it and they’re an adult, sure. But, I don’t want any part in encouraging kids that want to be fighters when they grow up. It’s a s— profession.”

If they’re looking to become one of those to win a collegiate national title, wrestlers are able to take on different skillsets at Askren’s camps and the academy. They can master the “funk” that Askren and his brother famously crafted with the “Funky Fresh” camp, or they can work on the basics on top (“Alcatraz” camps), bottom (“Houdini” camps), or in the neutral position (“Takedown King” camps).

Add in the presence of collegiate national champions like Spencer Lee, Yianni Diakomihalis or Seth Gross at the academy’s “Superstar Camps,” and there’s a little bit of everything for those looking to become the next Askren in the offseason.

“We have something for everybody,” Askren said during his “Shark Tank”-like pitch for the academy. “Last year, we had people from 32 states come to one camp. One “Funky Fresh” camp, 32 states.”

Askren’s been teaching kids for years at this point, and he’s seen plenty of success from those who have walked through the academy’s doors, stepped onto the mat, and left the building as an improved wrestler. A wrestler looking to become a winner.

In Askren’s own case, he’s won everywhere he’s gone in life. He compiled national titles as a Missouri Tiger, won welterweight titles in the cage for Bellator and ONE Championship, and took home a win in a bout as a member of the UFC.

Now, he’s molding the next generation of winners, paying it forward as he looks to add a different kind of victory to his resume of physical victories: a moral one.

The Swing of Things Former UFC fighter Ben Askren paying it forward with wrestling academy after retirement from MMA
%d bloggers like this: