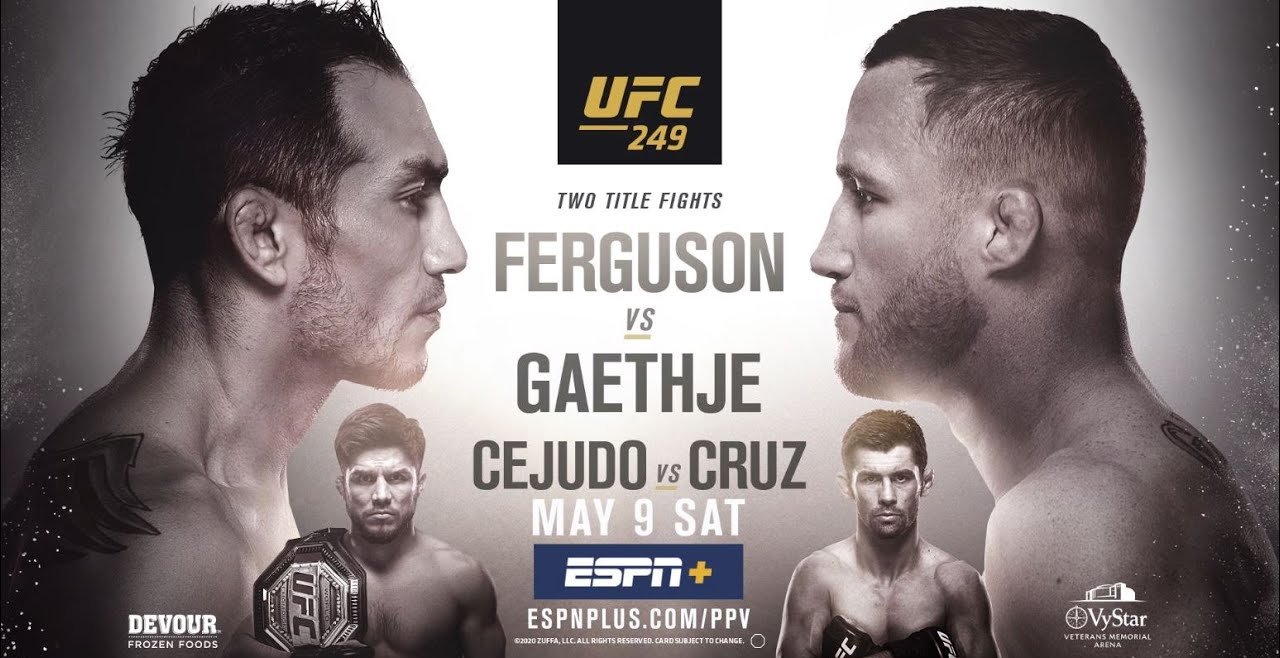 Come one, come all! Welcome to the UFC hype-train. Keep your hands and feet inside the ride at all times, and let’s hope this thing goes off without a hitch!

That’s right, sports are back! And the most popular MMA promotion in the world is serving up a stacked pay-per-view ticket, top to bottom. So if you’re new to the game, a casual fan or someone just itching for any kind of live sports, this is the guide for you.

I will be previewing the entire main card, as well as the featured preliminary bout, for your reading pleasure. So sit back, relax and get to know the athletes taking part in this historic UFC event:

Few fighters epitomize their nickname as authentically as Tony Ferguson (1): “El Cucuy,” truly is the boogeyman of the lightweight division.

Ferguson’s free-flow style presents an air of unpredictability, making him a nightmare to prepare for. With unorthodox striking and an aggressive ground game, Ferguson has finished 80 percent of his wins, and 20-of-28 professional bouts. Following a loss to Michael Johnson in 2012, he would go on to rattle off a dozen consecutive victories in the UFC, tied for the longest streak in the 155-pound division.

Opposing Ferguson will be Arizona’s Justin Gaethje (4). A two-time state champion in freestyle wrestling and NCAA D1 All-American at the University of Northern Colorado, Gaethje has more than cut his teeth in the world of combat sports.

Coming off back-to-back-to-back knockout victories, Gaethje’s star has never shone brighter. After a rocky start to his UFC career which saw him lose two of his first three bouts, the 31-year-old has found his footing. Known for his reckless style of fighting, highlighted by his debilitating leg-kicks, Gaethje has assumed a more cerebral approach, albeit still hellaciously aggressive.

Similar to Ferguson, the knock against Gaethje is his lack of defense, and willingness to accept damage in order to return even more. In the words of former UFC fighter Brendan Schaub, this fight is “First-Team All Violence,” and a monstrous main event.

Boasting one of the most impressive resumés in combat sports, Olympic gold medalist Henry Cejudo (C) aims to defend his Bantamweight Championship for the second time.

After a 32-second dispatching of then-champion TJ Dillashaw and a three-round war with Marlon Moraes, both in 2019, Cejudo will face a unique challenge in Dominick Cruz (NR).

The latter, who has captured the 135-pound title twice before, will look to make UFC history when he returns from another lengthy layoff. In a career defined by injuries and his ability to overcome them, Cruz will step into the Octagon for the first time since 2016 (1,226 days, in case you were wondering). The mixed martial arts veteran has stated his disbelief in ring rust on multiple occasions, claiming it is not something he worries about. And with just two losses since 2005, it’s reasonable to take his word.

>>RELATED: The battle outside of the cage: UFC fighters detail the anxiety they face away from the Octagon

With some of the most dominant wrestling in the lighter weight classes, aided by an equally-dominant top game, and the quick-twitch muscles to put it all together, Cejudo is a tough puzzle to solve. Cruz will counter with his signature footwork and head movement, a pairing that has made him into a defensive wizard, one of the toughest targets to hit on the roster.

Viewers will be treated to a fickle, fast-paced matchup between two of the UFC’s best, a technical treat.

What more could an MMA fan (or sports fan, for that matter) ask for? Two massive heavyweights, two knockout artists and, most importantly, two talented combatants.

Ngannou (2), who challenged for the UFC Heavyweight Championship in 2018, and Rozenstruick (6), who has never been defeated, represent two of UFC’s best international fighters, hailing from Cameroon and Suriname, respectively.

With a 90-percent knockout rate, Rozenstruick made a name for himself in 2019, finishing all four of his fights in violent fashion. Most recently, a last-second butchering which left Alistair Overeem’s lip so mangled that the referee was forced to end the contest with four seconds to go.

Additionally, “Bigi Boi” defeated former UFC champion Andrei Arlovski, as well as Junior Albini and Allen Crowder. Now, fans will find out if his knockout power can matchup favorably against the hardest puncher in the UFC: “The Predator.”

Ngannou grew up under harsh circumstances, working in Batié, Cameroon’s treacherous sand mines. Which, by comparison, makes the Octagon seem like a walk in the park. Engaging in combat has never seemed to phase the 33-year-old, who has put together a 9-2 record under the UFC’s banner.

But after back-to-back underwhelming losses, Ngannou went back to the drawing board before tying together three knockout triumphs. These came at the hands of some of the division’s best in Curtis Blaydes, Cain Velasquez and Junior dos Santos. Impressive.

Now, having regained much of the ground he had lost, the 6-foot-4, 255-pound Ngannou is more dangerous than ever, with the ability to end a fight with a single punch. So, when Ngannou steps foot onto the canvas with the equally-intimidating Rozenstruick crosswise: don’t blink.

Jeremy Stephens (7) pitted against Calvin Kattar (9) is a prime example of professional matchmaking. Of course, setting up two top-10 fighters seems like a no-brainer. And, quite frankly, it is. But this fight offers more than meets the eye.

Stephens has long been regarded as a UFC contender throughout multiple weight classes. Known for his heavy hands and forward-bound style, “Lil’ Heathen” is a promoter’s dream: guaranteed action. Despite a lengthy, mostly-successful mixed martial arts career, Stephens has never made it to the top of the mountain. And after his third consecutive loss, he seems to be running out of chances.

Enter: Calvin Kattar. The prime gem of New England’s growing MMA scene, Kattar possesses some of the most crisp boxing in the game. Couple that with a 77-percent takedown defense rate, and Boston might be looking at another championship in the near future.

So, in regards to the excellent matchmaking, here’s the reasoning: Stephens has begun to slide late in his career. Yes, he’s only 33, but with a whopping 46 professional fights, he’s spent quite a bit of time in combat. Conversely, Kattar—who is 32-years-old with only 24 fights—is seeing his stock rise. This means that if Stephens wins, UFC can further market one of its known commodities: an exciting finisher with dynamite in his hands, guaranteed to bring the action. And if Kattar wins, the promotion will have a new top contender to push. Win-win.

Now, who takes this matchup? As stated: Stephens hits hard. Really hard. But Kattar isn’t so easy to hit, and with years of traditional boxing experience, technique is the name of his game. That’s not to say Stephens doesn’t possess technical aspects to his striking repertoire as well. Similarly, Kattar has some mustard on his punches, too.

One more time: a matchmaker’s dream… and a sports bettor’s nightmare.

Lights, camera, action! This one sounds like it’s out of a movie.

On one side of the cage: Greg Hardy. A former pro-bowl caliber defensive end for the Carolina Panthers and Dallas Cowboys, shunned from the NFL after violating its domestic violence and drug policies, and showing little to no remorse.

On the other side of the cage: Yorgan De Castro. A humble immigrant from beautiful Cape Verde, De Castro works as a security guard at Durfee High School in Fall River, Massachusetts. Still, he’s found the time to train, and was invited onto Dana White’s Tuesday Night Contender Series, where he finished his opponent with leg kicks and hammer fists to earn himself a UFC contract.

Hardy wins the size matchup, with a six-inch reach advantage and a four-inch height advantage. However, Castro has yet to taste defeat, winning all six of his professional bouts, five via knockout.

In the most unpredictable weight class, this bout follows suit. Expect a quick one here.

We’ve got a rematch on our hands for UFC 249’s featured preliminary bout. Two of the best nicknames in MMA collide with Donald “Cowboy” Cerrone (6) taking on Anthony “Showtime” Pettis (15).

These two first met in 2013, when Pettis finished Cerrone with a devastating kick to the body, followed by a flurry of punches. Pettis would go on to defeat former-champion Benson Henderson to capture the UFC Lightweight Championship, while “Cowboy” would put together a storied career marked by his ‘anytime, anyplace’ attitude.

Seven years later, the latter is in the midst of the second three-fight losing streak of his career, while Pettis has jumped back-and-forth between 145, 155 and 170 pounds, winning just two of his last five and four of his last ten. So, it’s safe to say the rematch comes with a bit less hype than the original bout. Nonetheless, this fight promises to bring the heat.

While the fight won’t exactly determine the next contender at 170 pounds, it will pit two consummate creators of violence against each other, with a lot more than just a paycheck on the line. This fight is about revenge, legacy and a much needed win for either man.