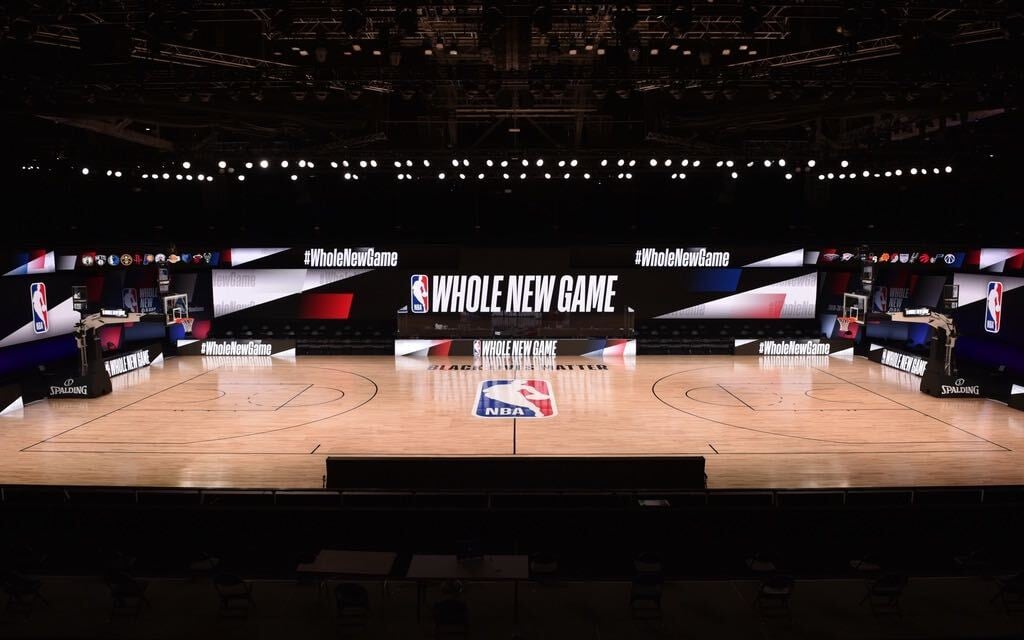 Scrimmages will start on Wednesday, July 22, running through Tuesday, July 28, while the official restart will begin on Thursday, July 30. When those games start, they will be taking place on a carefully-crafted court inside of the NBA’s bubble in Orlando, with numerous protocols in place to prevent the spread of the coronavirus.

>>RELATED: 2020 NBA Playoffs: Ranking all 22 teams’ chances at winning the NBA Finals when the season resumes

Benches will feature socially-distanced chairs, the scorers’ area will be guarded by plexiglass, and broadcasters will be blocked off individually in their own space, as well.

No fans will be in attendance for any of the league’s games, which will be held on the main court with large screens lining its four sides rather than seating. Meanwhile, practice courts line a massive convention space with each of the restart’s 22 teams getting their own custom treatment on their own floors.

>>RELATED: The reasons why some NBA players won’t be on the court when the season resumes

Camera angles will also be different than viewers are used to, with just one camera operator on the floor during games. All other camera angles will be created using robotically-operated cameras to adhere to social distancing recommendations.

Only one cameraman will be allowed court level. Other cameras will be robotically operated. pic.twitter.com/3E7syqaMov

The latest developments give fans a nearly-full picture of what their favorite NBA players are experiencing in Orlando, which has turned into the league’s version of a real-life “NBA 2K Neighborhood” with its hotel rooms, pools, golf courses, and even an NBA-branded barbershop.

Scrimmages begin tomorrow (7/22) through Tuesday (7/28) and will air on NBA League Pass and NBA TV! The NBA Restart begins on July 30 with games all day and night. pic.twitter.com/AiZeCksoSG

Fans will also notice a new element on the court itself, as the league placed the phrase “Black Lives Matter” above its logo on its main floor as part of its efforts to advocate for social justice and the end of police brutality.

“We have worked together with the Players Association to establish a restart plan that prioritizes health and safety, preserves competitive fairness and provides a platform to address social justice issues,” NBA Commissioner Adam Silver said.  “We are grateful to our longtime collaborator Disney for its role in playing host and making this return to play possible, and we also thank the public health officials and infectious disease specialists who helped guide the creation of comprehensive medical protocols and protections.”

A look at the Black Lives Matter message on the court in Orlando. pic.twitter.com/zQWdEw72sz

The WNBA will have the same “Black Lives Matter” messaging on their court and on their warm-up shirts when their season gets underway, and the league’s players will also have the phrase “Say Her Name” displayed on the backs of their warm-ups.

>>RELATED: The Decision: Reminiscing on LeBron James’ move and its impact 10 years later

“This 2020 WNBA season will truly be one unlike any other, and we’re looking forward to using our collective platform to highlight the tremendous athletes in the WNBA as well as their advocacy for social change,” WNBA Commissioner Cathy Engelbert said.

The restart will officially get underway with a doubleheader on July 30 featuring a game between the New Orleans Pelicans and the Utah Jazz and a Staples Center-turned-Orlando battle between the Los Angeles Clippers and Los Angeles Lakers.

The Swing of Things Take a look at the NBA’s new court and setup for the Orlando bubble
%d bloggers like this: