As Week 16 came to an end on December 23, 2019, many fantasy football owners went to sleep with their heads held high and a metaphorical trophy laying next to them in bed, celebrating a championship as a result of their team’s performance in the postseason.

There was undoubtedly a large amount of pivotal decisions made when it came to a team’s depth that helped separate the men and women from the boys and girls in finals matchups throughout the week.

But, good teams are made great by one or two studs that turn it on when the lights shine their brightest, helping to carry a team throughout an entire season with clutch performances on a consistent basis. The Christian McCaffrey’s, the Michael Thomas’s, and many more familiar faces that keep the wheels turning on any successful fantasy football machine.

While a championship is all that matters in the end and there’s a MVP trophy to hand out in the real NFL, there should be a vote to determine the MVP of the 2019 fantasy football season, as well. To help filter the field, it’s time to look at who would be the most deserving of that honor as we break down the best fantasy football players of 2019. 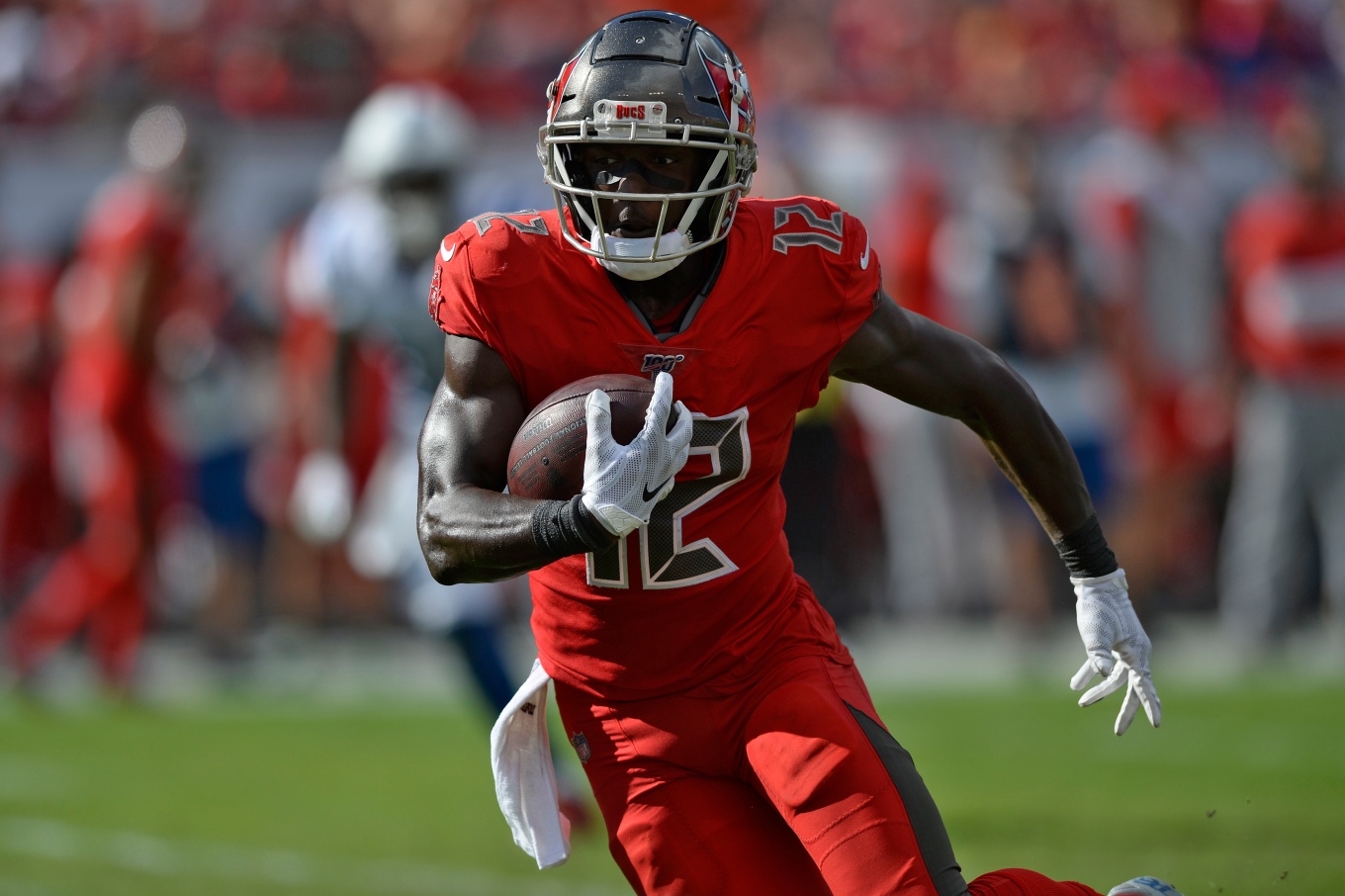 A surprise stud in the 2019 fantasy football season, Chris Godwin helped to spark a Buccaneers offense that ended up being the most fantasy-friendly of any team across the league.

Godwin racked up 276 fantasy points in 2019, and came in as the second-ranked wide receiver of the year in PPR (point per reception) leagues. While he wasn’t around to contribute in fantasy football finals matchups due to an injury, he was still important enough to help teams get to the postseason, averaging 19.7 points a game throughout the year.

>>RELATED: Tanking? Load management? How leagues can buck popular trends taking over the NBA and NFL

All of this came while Godwin served as the number two receiver in the Buccaneers depth chart behind Mike Evans, leading many to wonder what could’ve been if he was a top target on another team in the league.

Either way, Godwin was a solid surprise for fantasy owners who took him in the middle rounds, and helped many (including myself) win fantasy football titles in 2019.

Christian McCaffrey may have been the easy choice for the top running back of the year, but Dalvin Cook put up some quality numbers in 2019 in the Vikings backfield to earn him some respect in the fantasy football world.

>>RELATED: What’s on each NFL team’s holiday wish list as the end of the regular season nears?

Averaging 20.9 points a game, Cook was a workhorse in Minnesota this season, putting up more than 25 points in six weeks in PPR leagues. He eclipsed 30 points on the road in Dallas against the Cowboys in Week 10, but tapered off at the end of the year from Week 11 through Week 15.

Another injury derailed the end of Cook’s season, putting a damper on his fantasy football reputation as owners tried to win titles without him. But, if he can stay healthy over the next few years, he’ll continue to put up big numbers for fantasy football players for a long time.

He fell apart in Week 16, which definitely left a sour taste in many owners’ mouths, but Deshaun Watson came in clutch throughout 2019, earning himself a spot as the second-best quarterback in the fantasy football world.

Even with just nine points in Week 16 against the Buccaneers, Watson averaged more than 21 points a game under center for the Texans, peaking with a 41.7 point performance in Week 5 against the Falcons.

He went over 25 points seven times, and put up 26 touchdowns through the air with seven touchdowns on the ground throughout the year. He was consistent, he was a dual threat in numerous games, he was everything fantasy football owners could want when it came to their QB1 in 2019.

With all of that in mind, it made sense to give him a top-five spot in the countdown of the six best players in fantasy football in 2019. 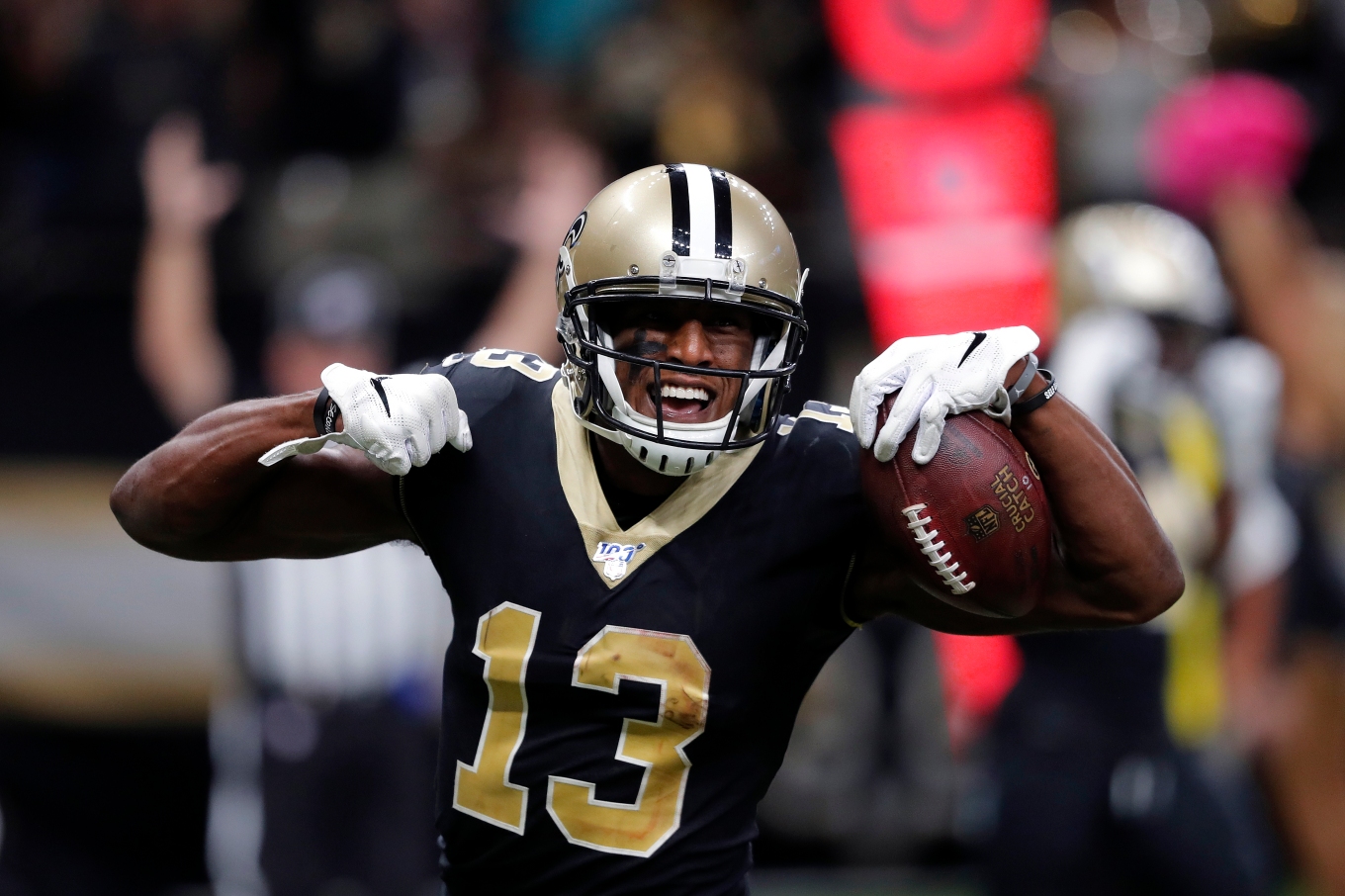 The star of my own championship-winning team this season, Michael Thomas carried the Saints on offense whether he had Drew Brees or Teddy Bridgewater throwing him the ball, and carried fantasy football teams at the same time with his record-breaking season’s worth of receptions.

With just one game under 15 points in PPR leagues, Thomas dominated in almost every receiving category this season. He averaged 24.5 points a game, tallying 145 receptions through 15 games, good enough for 9.6 points a game with receptions alone.

He only recorded nine touchdowns through the fantasy football season, which was many fans’ knock against him, but made up for it with his overall consistency. He proved to be worthy of a first-round pick in 2019 fantasy football drafts, and doesn’t look like he’ll be going anywhere anytime soon.

If you drafted Lamar Jackson this year, it was likely a late-round pick as a backup quarterback, much like Patrick Mahomes was in 2018 fantasy football drafts. But, just like Mahomes last year, if you drafted Jackson, you landed yourself the ultimate sleeper pick, and the likely league MVP in the process.

With Jackson sitting out Week 17 as the Ravens rest up with their homefield advantage already locked up, fans have the full scope of information when it comes to Jackson’s first full year as a starting quarterback, and the numbers are phenomenal.

Jackson put up 415 fantasy points in his 16 games on the field, averaging more than 27 points a game. He was under 20 points just twice on the year, and scored more than 30 points in seven games. If that wasn’t enough, he scored 30-plus in three straight weeks in the heart of the season as he hit his peak.

He ran for an NFL-record 1,103 rushing yards this year, and also tied a 23-year-old franchise record by throwing for 33 touchdowns.

Considering Jackson probably went in rounds 12-15 in most drafts, it’s safe to say he was the pick of the year for anyone who took the chance on him as their quarterback. He’ll be a star of fantasy football teams for years to come, and runs in for the runner-up spot on this list for 2019.

Fantasy football owners knew Christian McCaffrey would eventually be a stud when he entered the league a few years ago, and it appears the Panthers running back hit his true stride in 2019 as he dominated across the board for owners that picked him up in their drafts.

As of December 23 in leagues with PPR scoring, the Stanford product only had one game with under 10 points, and only two games all season where he dropped less than 20 points. He put up 30-plus points in eight games, and managed to exceed 40 points twice.

Through 16 games in 2019, McCaffrey had 109 total receptions on the year, and broke his own NFL record for the most catches by a running back in a single season.

With one game to go, he was 67 yards away from becoming the third player to ever record 1,000 rushing yards and 1,000 receiving yards in a single season, proving his worth in leagues where receptions could make or break a game.

He’s the ultimate dual threat, much like Lamar Jackson was in the Ravens backfield, and dominated in a scenario where the Panthers couldn’t get anything going throughout the year. He’s going to be scary to play against in both the real world and fantasy world for years to come, and takes the crown when it comes to the top fantasy football players of 2019.

5 thoughts on “Pick-Six: The NFL’s best fantasy football players of 2019” Leave a comment ›