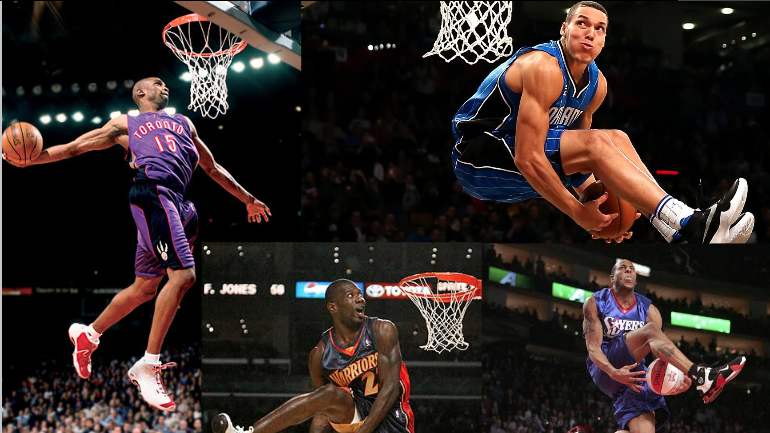 Last Saturday’s Dunk Contest was one of the best I’ve ever seen, if not the best. 20-year olds Zach LaVine and Aaron Gordon pulled off some of the best dunks and brought life back to what was previously a dead Saturday night during All-Star Weekend. People have been debating left and right whether or not this year was better than the years of Michael Jordan and Dominique Wilkins or if the dunks were better than Vince Carter’s in 2000, so I decided to comprise a list of the best dunks in Dunk Contest history.

This isn’t the only time Vince Carter will appear on this list, and it isn’t the only time the year 2000 will be on it either. This 2000 Dunk Contest wasn’t the greatest in history as far as the rest of the competition, but Carter made it one of the best by myself. He knew he was winning this contest, and his confidence made the dunks that much more aggressive and that much better. He signaled himself in this dunk that it was over, and he was 100% right.

5. 2004 – Jason Richardson’s Dunk Off The Backboard Between The Legs

This dunk is very underrated in my opinion, but I understand why. Jason Richardson was one of the best to participate in the Dunk Contest, but there have been so many great talents that tend to appear over him. 2004 also wasn’t full of big names, as Richardson was competing against Fred Jones, Chris “Birdman” Anderson, and Ricky Davis. Richardson didn’t even win the contest, as both him and Jones didn’t complete a dunk in the final round, but this dunk was still impressive to say the least.

I know this dunk just happened last Saturday, but I feel that it truly deserves to be on this list. I have never reacted to a dunk like I did with this one, and it literally brought me out of my seat at home. It got everyone in attendance on their feet, which has been rare in the last six or seven years, and made the night special again. Gordon could’ve (and in my opinion, should’ve) won the contest this year just off of this dunk, and I can’t wait to see what he does in years to come. I think time will make this dunk even better, showing just how impressive it really is, and it will move up on fan’s dunk lists in the next few years.

Just like Gordon had his win stolen from him this year, Igoudala should’ve won the contest in 2006. The height he got on this dunk and the fact he barely got his head out of the way from the backboard was so impressive to me. Coming from behind the basket is already crazy enough, and putting the ball between his legs in the process was the icing on the cake. Add in the Allen Iverson star power, and this dunk is one of the best in history.

Carter’s performance in the 2000 Dunk Contest is probably the best solo performance in the event’s history. The authority he threw every dunk down with was insane, and it added to the moves he was pulling off on his way to the rim. It revolutionized the Dunk Contest and the biggest thing to me was that this was just his first dunk of the night. He started everything off with a bang, and got everyone in the crowd ready for a historic night of dunks.

This dunk obviously isn’t as impressive today, as numerous players have pulled off the dunk (some in more impressive fashion). However, this dunk is the most notable and most memorable in dunk contest and NBA history. It’s how you remember Michael Jordan when you look back on his career, it’s the logo of his brand, it’s basketball history. It wasn’t as powerful as a Carter dunk, and didn’t have as much hang time as some of the competitors on Saturday night, but it was the first of its kind and it was perfect.